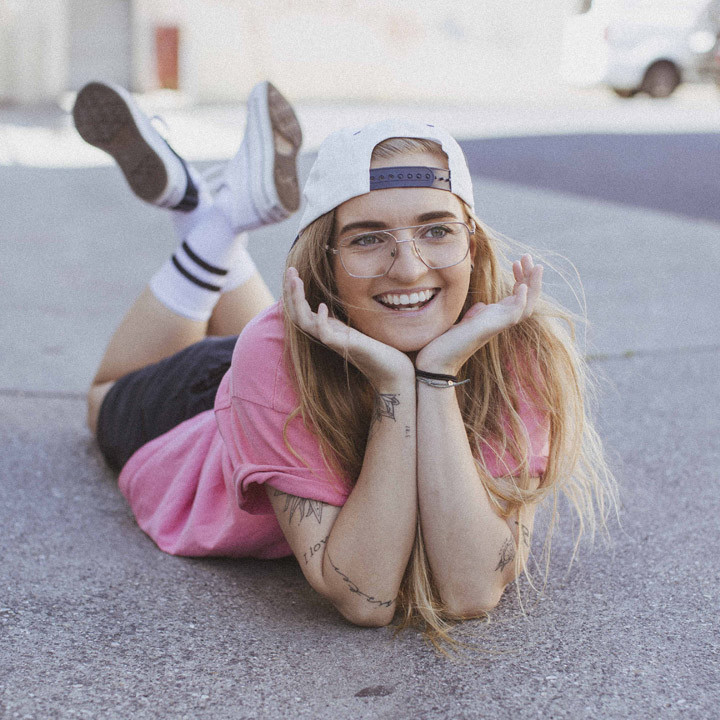 G Flip is all in, all the time – the Melbourne singer, producer and multi-instrumentalist, born Georgia Flipo, does nothing by halves. When she auditioned for a gig as a band’s touring drummer, she was told to learn three of their songs; she practiced until her hands blistered and bled, showed up with over twenty songs memorised, and got the job over two dozen men. She was just 19.

As a kid she worshipped her older cousin’s drum kit from afar, too scared to try to play; when her uncle bought her a bright blue kit for her ninth birthday, she cried tears of joy – and the addiction set in instantly. At school she was known as “that drum girl”; from Year 8 on, she spent every spare moment with her drum teacher, Jenny Rose Morrish who was, like her, young, queer and female.

When Jenny died suddenly in her early 30s, it drove a devastated Georgia to go hard after the dreams they’d talked about in those long hours at school: tour the US, be “that drum girl who sings”, make her own music. After a couple of years on a tour bus with the band, somewhere in the desert near El Paso, Texas, she realised she’d taken other people’s music as far as she could. When the band announced a conveniently timed breakup, she headed back to Melbourne and holed herself up in a her suburban sharehouse for all of 2017.

In the afternoons and evenings, Georgia taught drums and piano to kids in order to support herself. But from 9.30am to 4.30pm every day of 2017, she taught herself. How to produce her own songs; how to tease out the melodies she hummed into her iPhone’s voice memo app; how to find her own voice after years of performing other people’s songs.

She didn’t go to gigs. She didn’t watch TV. She doesn’t have any hobbies. Nothing by halves.

“I wake up every day and I'm just thinking about this” she says. “I went crazy because I stayed in my bedroom. I'd talk to myself all the time and I talked to my drum kit, like, ‘Hey man! Let’s make some music!’ Because I'm in here with no human contact. I just talked to my drum kit. And then I read this quote that said ‘Create the things you wish existed’. And then I remember sitting on my bed being like, ‘What do I wish existed? I wish my drum kit would talk back to me when I talk to it.’”

Georgia teamed up with a friend to create just that: a round LCD screen for the front of her hand-made kick drum, with the emoji-inspired broken-hearted face that she designed to match her “super emotional” intensity. With a drum pad in place so she can play the kick normally, the screen can pulse colours in response to sound, loop video, or just “talk”, using a microphone wired up to the rigged drum. This is Je Ro Mo, G’s “talking drum kit” – named, naturally, for Jenny Rose, her beloved drum teacher, and “powered” by her memory.

An addictive, bittersweet shard of shimmering pop, GF’s debut single ‘About You’ builds from a dreamy murmur into a cathartic tumble of syllables, luminous layered synths, and her clean, spacious drumming. It was the first track G pieced together – inspired by her “hectic, toxic, cinematic” on-off relationship and recorded in a day in her bedroom studio, the wistful verse and chorus flowing almost instinctively into “a shitty mic from Cash Converters”. It’s all her.

So this is G Flip. Honest and unfiltered. With the drive, discipline and determination to be the sort of inspiration she yearned for to a new generation of women. She has 897 voice memos in her phone and counting, full of songs, snippets, melodies and ideas. In 2018, she’s out of her bedroom, and she’s all in.