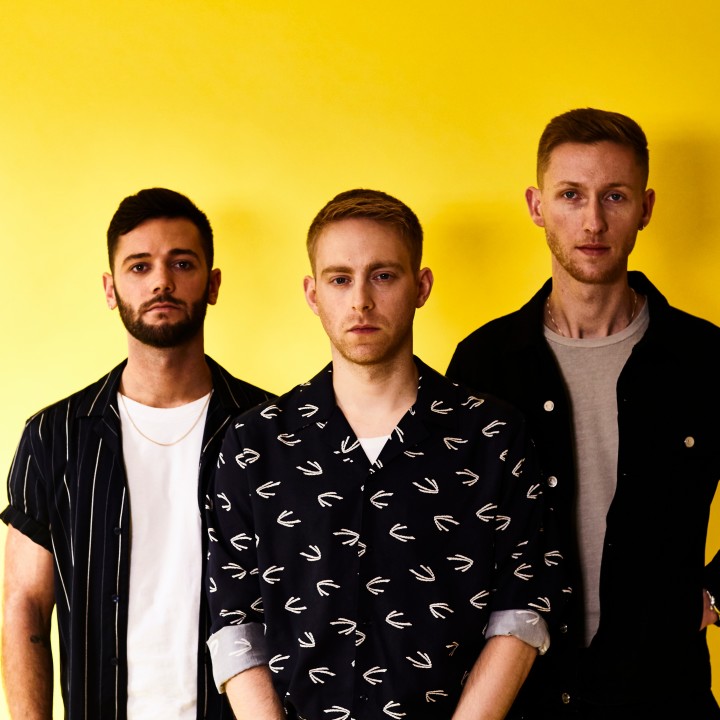 Few bands launch as explosively as Flawes, who bolted from the blocks straight on to radio within a mere three months of forming. Fewer still survive the hype, keep control of their career and appear as though there was always a master plan.

Flawes’ new body of work is an audacious leap on from the London-based trio’s adored EPs. The result of a self-imposed 18 months out of the limelight to nail the sound that will define them, their all new songs are instantly addictive. Flawes’ widescreen beauty and shimmering electronics remain hallmarks, but their new sound is bolder, sleeker and defiantly uplifting, tailor-made for both dancefloors and festival fields. “The band took off so quickly that there was never time to decide how we wanted to sound,” says Huddersfield-born frontman Josh Carruthers, aka JC, whose warm, soulful vocals are now more muscular. “We’d never played live when our first single jumped on to Radio 1. Nor had we written as a band. We achieved so much in a fantastic two years and changed a lot too. Our songs were becoming more direct and dramatic, more upbeat and less atmospheric. It was time to take a step back, explore new ideas and focus on the future.”

First release ‘Don’t Count Me Out' couldn’t capture Flawes’ fresh sound and fighting spirit more fully. A soaring ode to self-belief, it was inspired by a songwriting session in which the band were forced to stand their ground. “It’s a passionate song about refusing to be brushed aside,” says JC. “It’s a universal message, but having been away for a while, it’s also us announcing that we’re back, on our own terms.”

Flawes was formed by JC in the summer of 2015 in strange circumstances. All three members had worked as session musicians, but planned to start their own bands. JC and drummer Josh Hussey, aka Huss, were childhood friends from Huddersfield who had spent their teen years in different bands, sometimes supporting each other at shows.

Both moved to London separately before their bands fell apart and they took on session work. JC spent two years touring the world with Ella Eyre, but continued to write songs on the side. When Ella asked to hear some, she was so impressed that she booked JC as a support act. The catch? He didn’t have a band, had only completed a handful of tracks and the tour was in three months.

A chance meeting with Huss set the wheels in motion and an introduction to Twickenham-born guitarist Freddie Edwards sealed the deal. One rehearsal later, Flawes were a band. Several weeks were spent learning JC’s minimalist songs and on the cusp of supporting Ella on a sold-out UK tour.

The reaction was instant. BBC Introducing played their track ‘Don’t Wait For Me’ and, to Flawes’ astonishment, it was made Record of the Week on Radio 1, reached No.8 on Spotify’s viral chart and was chosen to soundtrack trailers for the hit US TV series Lie To Me. Labels lined up to sign them.

The next two years was a blur of shows, songwriting, airports and festival appearances. In 2016, Flawes released more music which helped their streaming stats soar, but incessant touring had begun to beef up their sound. ‘Could This Be Real’, their final single of 2017, revealed an upbeat new direction.

“Initially, I stood behind keyboards on stage,” recalls JC. “But you can’t do that at a festival. Out front, you don’t want lots of laid-back songs. Plus, we were writing together, adding more live drums and bigger guitar parts. It was a natural progression.”

With a debut album in mind, the trio stepped back to immerse themselves in writing and recording. Already, the band’s next future classic ‘Look No Further’ was underway.

“Look No Further began at my parents’ house in Huddersfield,” recalls Huss. “We’d just finished a tour in Leeds and the three of us went back there for our tea. JC had to get back to London so Freddie and I took a crate of Heineken left over from the tour up to the attic and that’s where the song began. It’s changed a lot from then to where it is now, but it set us on our way.”

Ditto a session in Wales with the producer Jim Elliot (Ellie Goulding, Foxes, Halsey) which spawned the gorgeous ‘Good For My Soul’, which features piano, JC’s dreamy falsetto, sleek beats and a boisterous chorus that demands arms be held aloft. The song was inspired by a break-up, but is really about coming out the other side, stronger and wiser.

“It’s an empowering break up song,” says JC. “It’s about a mate who was dumped out of the blue by the woman he’d hoped to marry. But in the end, he was happier without her.

“All of the songs have a positive message. Partly it’s because we had so much fun making these songs. Being in this band has been incredible for all of us. We’ve been around the world and achieved stuff we’d grown up dreaming of. We naturally found ourselves looking for the positives in life.”

This latest body of work was written and recorded last year between London, L.A. and the English countryside. ‘Don’t Count Me Out’ and the shapeshifting ‘Take This Slow’ were co-written in L.A. with the producer Josh Cumby. The latter opens with a voice recording made when the trio touched down in L.A. for the first time and features Freddie on ukulele.“You might struggle to hear it, but it’s in there,” laughs Freddie. “It was a 16th birthday present I hadn’t played for years. I had no idea what the tuning was supposed to be, but somehow it worked.”

‘Take It Slow’ is about enjoying the moment, which JC admits he’s guilty of forgetting to do. “I’m one of those people who’s always stressing about what’s up next,” says the singer. “Looking back, I realise how many amazing experiences we’ve had since the band began. Did I appreciate them at the time? Not enough. That’s something I’m trying to change. In the lyrics I namedrop Somerset Avenue, the street I grew up on. The song is about where we came from and where we are now. I love the voice clip because it’s genuine, not staged. We got off the plane exhausted but buzzing and I wanted to capture that moment.”

The nostalgic dancefloor anthem and soon-to-be single ‘When We Were Young’ was begun in L.A. with Kesha producer Drew Pearson, before Flawes added its ‘80s influences back home. ‘Highlights’’ spine-tingling title track was co-written with Nick Atkinson and Ed Holloway (Lewis Capaldi, Gabrielle Aplin). The optimistic, sun-soaked ‘Still Not Ready’ features a 10-strong gospel choir from east London and the fast-rising L.A. singer Alxxa guests on the majestic ‘Would You Mind If.’

“We had the time of our lives making this album,” says JC. “We worked every day to make sure that taking the time out was worth it. Now we can’t wait to get back on stage. I plan to appreciate every moment.”