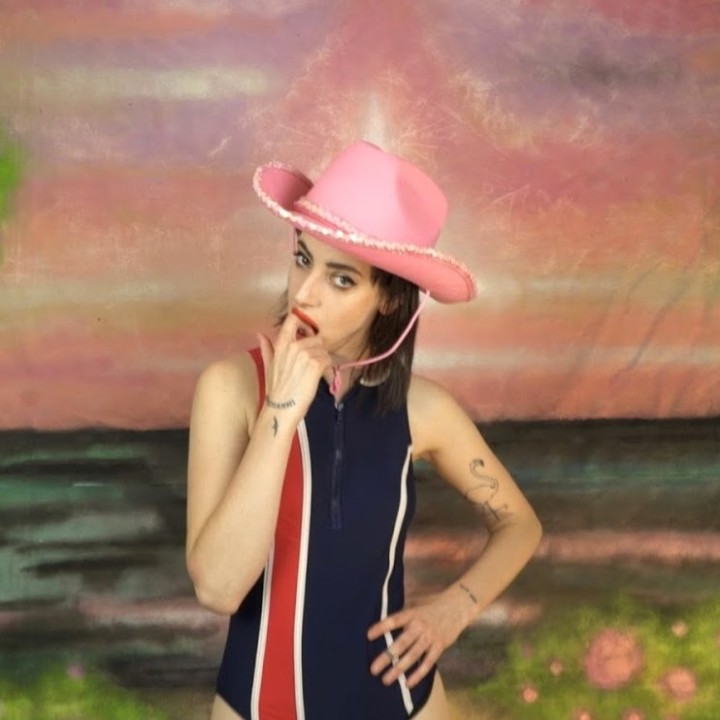 Du Blonde may sound like a band, but in fact it is, and always has been, the work of just one person. Beth Jeans Houghton.

Her new album Lung Bread For Daddy delves even deeper into self sufficiency, seeing Beth take the reigns on production, instrumentation, album artwork and direction of music videos. This project is entirely her own. “I've always known exactly what I want my records to sound like and apart from drums, I have the ability to play all the instruments, so why wouldn't I? It was also a ‘fuck you’ to anybody who has made me feel like my playing abilities were not good enough over the years.” Houghton states defiantly.

Lung Bread For Daddy veers wildly between genres reminiscent of proto-punk, psych rock and the wholesome song writing of the 1970’s, taking the listener on a journey through the landscape of her past. It is an honest and often uncomfortable look into the life of a person who’s experiences (“My lyrics are always autobiographical. I can't write fictional lyrics.”) have been touched by a myriad of characters, homes across continents, periods of extreme loneliness, mental illness and a search for an understanding of personal identity.

From her time spent in Los Angeles, living off 50 cent coffee and midnight walks along palm lined streets, an anxiety riddled ex-boyfriend with a gun collection and the encroachment of a biological clock that feels more societal than physical, Lung Bread For Daddy is one person’s first-hand account of what it feels like to be leaving their 20’s in an age where economic and political factors see those of her generation unable to imagine a stable future, and the psychological effects of living in a world in which success is seemingly measured not on kindness of heart, moral compass and individuality, but upon notoriety, youth, beauty and conformity.

Lung Bread For Daddy sees a meeting in which Beth’s previous two albums, 2015’s Welcome Back To Milk and her debut Yours Truly, Cellophane Nose, take a seat at the table and make amends. The raucous guitars and driving melodic bass lines of her last album remain, but step aside at key moments throughout the record to make space for the dynamic and soulful song writing for which she originally became known. Lyrically, she is not afraid to speak honestly about the discomfort of her experiences, be they at the hands of another, or purely her own doing. Album opener ‘Coffee Machine’ sees Du Blonde sitting in a room, surrounded by material gifts, but ultimately alone. ‘I’d rather have the man than the coffee machine’ she sings of her desire for human connection, before releasing a howl of rage and a guitar riff so heavy it could only be the sound of a person within the grips of emotional agony.

For all of the seriousness of Lung Bread For Daddy, Du Blonde’s notorious humour, often employing the uncomfortable and grotesque, has not been subdued. From bloody sheets, pubic hair and apathy towards dating, she remains blunt and unforgiving. “From a young age I've been drawn to the absurd, self-deprecating and sarcastic. That's how I learned to deal with the world and the pains that come with it. I think that's reflected in my lyrics.” Taking inspiration from hero Frank Zappa, who showed there are no rules to songwriting. “There’s a sick pleasure to be found in writing honestly and grotesquely.”

The past three years have seen Beth grow both musically and artistically. From her comic book ‘Butt Hurt’, to her large-scale acrylic paintings, a nearly completed novel, and her animated music videos for the Red Hot Chili Peppers and Ezra Furman, she continues to feed her insatiable thirst for creation on her own terms. A thirst that has seen her take charge of every aspect of Lung Bread For Daddy including the brutal self-portrait that adorns the cover of this record. Painted from a photograph taken during one of her lowest points, the image depicts Beth devoid not only of makeup, but self-worth and confidence. “I look tired and pretty much destroyed, which is a feeling I’ve known many times over; in the aftermath of relationships and that of making a record. Lyrically the record is very naked so I’m carrying on the nudity of my previous album covers, only this time it’s emotional instead of physical.” reveals Beth.

We first met Beth at 18, filled with a desire for creation, travel, adventure and experience. Lung Bread For Daddy is Beth at 28. She has created, travelled and experienced for 10 years straight, she has lived between London and Los Angeles, spent 5 months sleeping on a plastic air mattress during 100 degree heat, road tripped across the United States with strangers, endured a nervous breakdown, yielded to psychiatric medication, endured both positive and abusive relationships and learnt from both. She has documented it all in Lung Bread For Daddy.