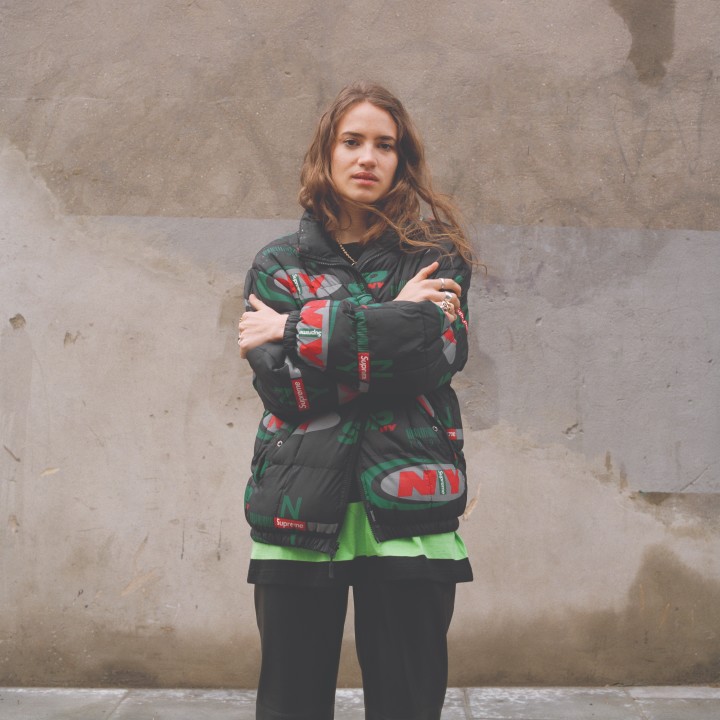 "I never really told the truth to anyone," sings Delilah Montagu. "But lately it's been harder to hide behind this picture of me." On the opening verse of her new single 'Version Of Me,' one that signifies a new chapter after time away following the release of her first EP 'In Gold,' London-based artist Delilah emerges a more emboldened, more self-assured, more urgent songwriter. Where 'In Gold' introduced her to the world with its pensive, soulful ruminations on coming-of-age, this new batch of songs marks a period in Delilah's life of irreversible maturity and growth, as she evolves from girl-next-door to woman on a mission. At home with her mum and her girlfriend in Petworth in West Sussex, socially distanced in the place where she grew up, she's been reflecting on the reasons behind this shedding of a former shell and why she's suddenly found herself in a glut of autobiographical writing.

"I feel like I've given birth to children," she says, of the new material. "I never realised it could feel like that." With her debut EP 'In Gold' it was a different feeling because she wrote from afar, out the other end of scenarios and pasts that were long buried. The vulnerability and honesty she's reaching for now feels more authentic, scarier, but even more worth the risk. "God I've never worked so hard," she says. "In every aspect. I've never been so involved. It's very different."

After the success of 'In Gold' and its lead single 'Temptation,' Delilah took to Los Angeles, and met up with producer Robin Hannibal (production credits: Rhye, Kendrick Lamar, Anderson Paak). Theirs was the type of creative spark that artists spend a lifetime trying to find. It was a natural chemistry. They met two years prior, and knew they had a connection but it wasn't till later that their paths aligned. After an initial few days of writing together last year, Delilah had three of her favourite songs she'd ever written on her hands. Returning to LA in 2020 for a longer stint of time, she found herself miles from home and far from the things that may have been holding her back. She had focus. She was free from the shackles of what had been. "I was so far removed that I could just forget there's a world there. It's a bubble." In LA, she and Hannibal talked as confidants and planned how to allow Delilah to step into her voice more -- both in the vocal sense, and in the lyrical sense. In the songs that emerged, her vocal is much more in the forefront, elevated by horns, strings and electronics. The stories are raw, and immediately resonating -- specific but never alienating. "I felt the need to express what I'd been through. I've never really given myself the option to do that," she says.

When Delilah was growing up, raised by her single mother, she would write songs on her piano. She did it from the age of seven, inspired by an unusually mature batch of forebears for someone so young. Delilah was brought up divorced from the zeitgeist, discouraged from consuming popular culture, or watching TV. She was reared on Carole King and Leonard Cohen records. She loved the storytelling, and so she told stories too, mainly influenced by what she witnessed around her. "I would write songs every day about my mum's heartbreak. People would say, 'How do you know that?' A seven-year-old talking about proper heartbreak..." Delilah wasn't writing her own stories though. When it came to her break into the industry and to quickly being thrust into London, a record deal, and new attention, she still wasn't really digging deep into her own recent narrative and pulling it out in her songs. She was holding back. "During the release of 'In Gold' I was at my worst," she says. "I was in a process of asking 'Who am I? What am I doing? I'm shit.'" Delilah had countless opinions coming at her, and she didn't allow herself to have one. She was being pulled along by the experience, going through a breakup, sofa-surfing, oblivious. She wasn't the 22-year- old self-made thinker she is now.

So what shifted? "I experienced not having a voice, being very suppressed and put down," she says, recalling a pattern in the past year that she developed an awareness of. She wasn't the driving force in her relationships and she decided she didn't want to put up with it any more. In one of the dynamics, she experienced a lot of shame put upon her by someone else. It made her even more self-critical, which unfortunately wasn't an unfamiliar feeling. Delilah is sober and has been in recovery for a few years. "It was this spiral of no confidence. It was weird -- almost like this other addiction," she says. "It was this thing where I thought I was doing everything wrong." Pulling herself out of that required completely turning herself around. Taking back her power has created the inverse in her, and now her desire and her ambition is to be the leading lady in her own story, to do everything herself. "All I wanna do is be myself and speak the truth. Because that's all I can do," she says.

Hannibal helped eke this out of her by encouraging a new songwriting process. Rather than sitting down at a piano and playing a meditation to see what might come out, Delilah found herself journaling, free-writing, just jotting down her experiences and starting from those details. "I ask myself: what am I trying to say? How is it relevant to me and my experience? I want to write specifically about things I've been through. I've never done that before." Take 'Faultline' and 'Undone,' songs in which she unveils the struggles she's had with addiction and with unhealthy body dysmorphia, rooting down in her anger about it and learning how to sit with herself. They document her relationship to her mother and father, too. "It releases that emotion rather than pretending that everything's fine," she says. "I used to write songs pretending that everything's fine and that's not what I'm doing any more, and it's making my life a bit better." She appreciates too, that for listeners her vulnerability will help to eradicate their own fears. Her songwriting is most recently inspired by vulnerable artists such as Bon Iver, Billie Eilish, Lizzo and James Blake. "When people tell me vulnerable things about themselves I feel more comfortable to be myself," she says. "I feel less shame."

Delilah realises that the culture we live in is more open and empathetic to discussing such trials but that's not why she's doing it. It feels intrinsic to her truth, and therefore to her expression. In the song 'Pretend' she addresses spending years not knowing who she was, faking that she did, and now finding strength in the lack of certainty. "I can still get hurt by people I trust and my heart can still be broken when I'm not being myself, so why wouldn't I just be myself?" she says. "It feels like a lot more effort not to be myself now." She's also significantly become a lot more open sharing her relationship with her girlfriend online, and not in a way that feels forced. 'This Is Not A Love Song' is about a period in which they were broken up, and Delilah was in denial about how much she missed their romance. As soon as they got back together, Delilah knew she wanted to be more sure of both their relationship and herself. Her partner reflected back at her just how much she'd changed and grown, which gave her that added self-assurance. She saw it through her eyes.

For Delilah, music was always an escape from reality, so it's a challenging place in which to want to face her fears, but in that regard she has achieved the seemingly impossible. Instead of dissociating, she's taking the bull by the horns. With the stakes higher, she's also taking the reins entirely on the creative process. From artwork to video concepts to titles, it's all Delilah now. Reeling from her recent performance of 'Drive' (a collaboration with Black Coffee, which continues to garner success and praise, and is the number 1 most streamed domestic single on Spotify ever in South Africa) at the online Global Citizen concert, she's finding a new sense of purpose in what she does too -- a form of healing for herself and for others. "That was one of the highlights of my life so far," she says of a concert featuring worldwide superstars such as Lady Gaga and organised by WHO in response to COVID-19. It all boils down to self-love and self-worth. "Before I was a passenger and now I'm properly at the front of the bus," she says. This time her ambition is unstoppable.