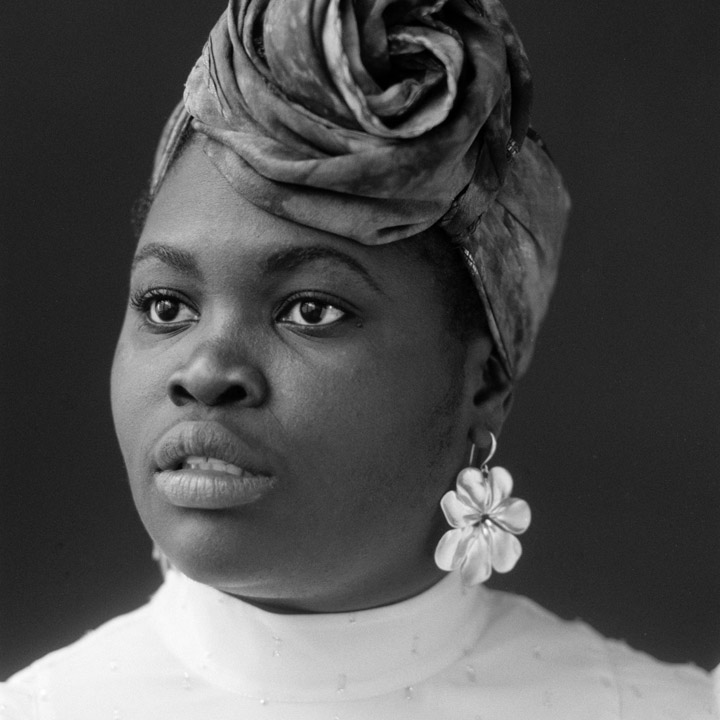 Daymé Arocena draws inspiration from the intertwining musical legacies of her native Cuba. A singer, composer and choir director, she's a bright-shining performer carrying the flame for a new generation of Cuban musicians. Approaching jazz, soul and classical influences with an innate sense of rhythm, she releases her second album Cubafonía in early 2017. With her home country's rich musical traditions serving as the album's springboard, she uses its different musical styles as the basis for each of Cubafonía's tracks, finding outside influences, from her tours of the world these past two years, to build on them.

Born and raised in Havana, her conservatoire training was combined with an upbringing grounded in Cuba's own musical foundations. Accepted age 9 into one of the country's prestigious music schools, she studied a choir directing course rooted in Western classical tradition. Meanwhile, she grew up with the day-to-day schooling in folkloric music that's common to most Cuban households. At regular, intimate get-togethers, celebrating the island's Santería religion, dancing and singing are the gatherings' mainstays -- a combination that's meant she sees its deep-rooted traditions in a wider musical context.

Not long after, François Renié, Communications Director at Havana Club, was struck by seeing one of her performances. Helming the Havana Cultura initiative -- a platform for contemporary Cuban creativity driven by Havana Club rum, which has co-produced an album series with Brownswood Recordings -- , Renié took an immediate shine to her. It was while making the first of those albums, during Brownswood label boss Gilles Peterson's first visit to Cuba, that Daymé improvised a head-turning rumba show with Edrey, from Grammy- nominated group Ogguere.

Two years later, the Havana Cultura Mix: The Soundclash! album saw the beginning of her work with Gilles and the Havana Cultura platform. The former's expansive vision as a DJ, broadcaster and promoter has gone hand-in-hand with the support from Havana Club.

An introduction to working with electronic producers for the first time, it was followed by her debut LP Nueva Era in 2015. She also accompanied Gilles in his journey through rumba culture for the expansive Havana Club Rumba Sessions project, which produced a feature- length documentary along with an album -- using her distinctive vocals -- of rumba reimaginings and sample pack. An EP of cover versions, titled One Takes, was also released in early 2016.

The reception to her music has spurred a whirlwind of opportunities: she shared an off-the- cuff live moment with Roy Ayers and Brazilian superstar Ed Motta to leave Worldwide Festival in tears of joy, jumped on stage with Miguel Atwood-Ferguson at his triumphant Suite for Ma Dukes show at the Barbican, and rung the opening bell of the New York Stock Exchange with a delegation from Women of the World. She has played shows from LA to Tokyo, charming audiences with her mesmerising vocal range and earthy sense of humour. She name-checks Kendrick Lamar and Anderson Paak as artists she would love to work with.

Despite all that, however, it's not distracted Daymé from a deep sense of seriousness about her art form; born of a uniquely musical culture, she strives to forge a cohesive musical language from Cuba's distinct musical dialects. Growing up in a two-bed house with 21 other people, every available surface was scuffed from the rumba rhythms which had been played out on them. It's a childhood typical of a country where children grow up readily exposed to the island's numerous, particular rhythms.

Cubafonía, then, could be considered her first "proper" album. Given free rein to work with her choice of Cuba's best musicians, she makes her first big statement as an artist. It's witness to her interconnected vision of Cuban music: drawing inspiration from the Caribbean island's different rhythms and styles -- from Guantanamo's fast-paced changüí, to the ever- present guaguancó and '70s-style ballada -- it pays tribute to shifting tastes and styles.

Her influences are a reflection of that environment. Discussing Pérez Prado, for example, she recalls how the Cuban mambo sound he created was evolved and adopted in Mexico where he moved and made his home. She idolises La Lupe, too, for the '50s rumba sound she made iconic in '60s-era New York. Outside of Cuba, she admires the flamenco-indebted vocal style of Spain's Concha Buika, and the way UK artists see different sounds combined through big ideas. "British music is more organised and conceptual," she explains.

In Cuba, however, cultures have been collided from the very beginning. Two of its central, interrelated practices -- Santería and rumba -- are perfect examples of contrasting European and Yoruban influences; the former is a religion combining Yoruban mythology and Catholic saints, while the latter -- the bedrock of Afro-Cuban music -- is built on a clave rhythm with connections to Sub-Saharan traditions. What's more, it borrows its name from the Spanish instrument, "la clave," which leads it.

Emerging from a culture where hybrids and amalgamations are the norm, Daymé embraces that reality. At a time when Cuba's borders look set to become more open, she is an outward-looking artist finding new musical connections. More importantly, she's doing it with an understanding of where she comes from. "We don't have this native culture," Daymé explains. "We don't have indigenous people, like Maya or Quechua. They made a country with people from everywhere -- that's what makes Cuban culture so different."