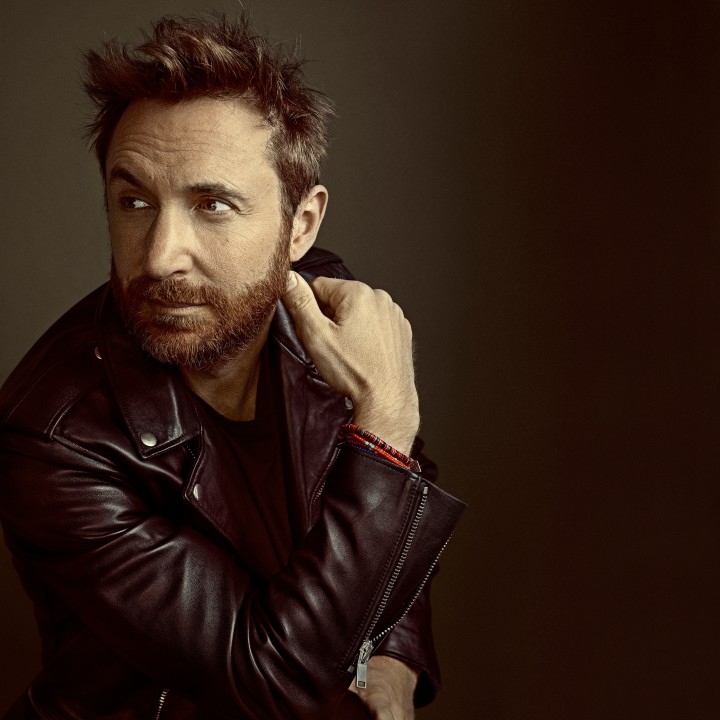 David Guetta is unique. His rare vision and innate ability to effortlessly bridge the gap between the two worlds of electronic and urban music has seen him produce some of the hottest collaborations on the planet – repeatedly. He is one of dance music’s greatest superstars, a 2x GRAMMY® Award-winning international icon with global sales now in excess of 50 million albums and singles, plus over 10 billion plays on YouTube and Spotify. His extraordinary catalog includes countless #1 singles, multiple gold and platinum certifications and the biggest social media numbers of any DJ/producer in history.

And that’s just his studio work. As a DJ and performer Guetta crisscrosses the globe, week in and week out, almost the whole year round, playing residencies in Ibiza and Las Vegas, with underground club shows, festival headlines and arena- and stadium-sized shows booked in between. For this boundlessly enthusiastic music-maker, it’s about taking new opportunities to a next level – whether it’s opening the 2016 Euros at Stade de France in Paris, closing the tournament under the Eiffel Tower, playing on the Great Wall of China, 400 meters under the Dead Sea in Israel or at Copacabana Beach for New Years Eve in front of 10 million people.

Now, after more than three decades spinning tunes and making music, Guetta, of course, knows exactly where next to take his craft and his music. Introducing the typically groundbreaking new album from this dance music pioneer...

Titled 7, it’s been over two years in the making. It was written, recorded and produced in Guetta’s studios in Los Angeles, London and Ibiza; features a stellar roll call of some the world’s greatest singers, rappers, DJs and producers; introduces a bunch of up-and-coming talents; brims with a brace of typically huge electronic pop anthems; and also features a second disc of underground dance tracks, recorded under Guetta’s Jack Back alias.

“I’m just so happy this album is finished and I’m so proud of it!” he exclaims.  “One thing I love about it is: I didn’t compromise. Instead of trying to fit DJ records and big radio songs at the same time, I was like: you know what? I’m just gonna make two albums. I’m gonna make no compromise!

"It might be a little bit old-school,” he adds, "but I still love the concept of an album. It gives you the possibility to express things that maybe you wouldn’t if you were just aiming for a radio single.”
“And I love this. I love being able to explore in different directions. Not having the pressure to necessarily be formatted for radio. And also my experience as an artist is sometimes you can be extremely surprised by the reaction of the people to your records. Titanium, for example, which changed both our lives,” he says of his huge global 2013 hit with Sia, “We were not expecting that to be so big, but some of my biggest hits were not the first or the second single from albums.”

Hence, an album with 15 tracks featuring the biggest names, such as Anne-Marie, Bebe Rexha, Black Coffee, G-Eazy, J Balvin, Jason Derulo, Jess Glynne, Justin Bieber, Lil Uzi Vert, Madison Beer, Martin Garrix, Nicki Minaj, Sia, Stefflon Don, Steve Aoki, Willy William and amazing upcoming talent like Ava Max, Brooks, Delilah Montagu, Faouzia, Mally Mall and Saweetie.
Then 12 more tracks that dig back to Guetta’s club DJ roots by paying homage to the likes of CeCe Rogers and cult Miami producers Murk… and all of it yoked together by the vision, talents and experience of an electronic trailblazer with 30 years in the game. A gamechanging album we can say, as it touches so many different genres, from Dance, Urban, Melodic songs to Reggeaton, Latin, EDM/Trap and Electrohouse and Techhouse.

As for the title: yes, this is Guetta’s seventh album, the long-awaited follow-up to 2014’s Listen. But the title has greater resonance for the Parisian.
“This album represents a full cycle in my life. There are seven days in a week, seven days to create the earth in the holy books… And I feel like I’m coming back to my beginning. It’s like a full circle.”

From the underground to the overground: in-demand singer/writer Sia, one of Guetta’s favourite collaborators, appears on Flames, another titanium-plated banger.

“Sia and I have done everything together. Sometimes I come with finished music and she writes on the top of it. Sometimes we’re together in the studio and we start from scratch, or from a chord progression on the piano. Sometimes she sends me a demo and I produce it, which was the case with ‘Flames’.”
Alternatively, Guetta will work up a track, email it to his preferred vocalist and trust that they’ll “murder it!” (in a good way). That was the process with Anne-Marie and ‘Don’t Leave Me Alone’, a spring/summer anthem that’s still all over daytime UK radio

Another A-lister, another creative process: Guetta explains how ‘2U’, his multi-platinum 2017 hit with Bieber, materialized.
“This happened through a friend of mine, Poo Bear. We were writing together in this small studio in a hotel in Las Vegas. And he played that song to Justin and then he sent me an email: ‘We have a surprise for you…’ And they sent me the vocals from Justin.
“I was like, ‘oh my God, this is crazy!’ Justin just loved it and recorded instantly.”

Another imminent monster is ‘Goodbye’, which features Jason Derulo, Nicki Minaj and Willy William. It’s testament to Guetta’s core musical vision that a track full of such talents doesn’t capsize, implode or feel less than the sum of its parts.

“With this album I wanted to do a combination of having a huge record like this that is bringing together the biggest of the biggest – but then have another record like Battle with Faouzia who is 17 years old and totally unknown. And then having huge rappers like G-Eazy and Lil Uzi Vert but also new rappers like Saweetie. I’m just trying to find that balance between having Sia and Madison Beer, who kills it on ‘Blame It On Love’. It’s freedom of experimenting in so many different fields.”

For Guetta, it’s about being flexible in his creativity, about being open to ideas and opportunities. Visiting Guetta’s LA studio, ultra-hot South African DJ/producer Black Coffee idly said: “We should make a record together one day.”

“And I said: ‘Well, let’s not make it one day, let’s make it right now!’”
By day’s end they had the blissful ‘Drive’. “It’s funny – after all this time, it happens to me so often that I make a record from scratch like this with songwriters or musicians. I always say: isn’t it magic that this morning this record did not exist? And now it’s there.”
Equally straightforward were the collaborations with fellow production heavyweights Stargate and Martin Garrix. In each case there was a connection and a mutual respect that allowed for instant magic.

“You know, I’ve been doing this for many years,” he reflects, “so I have my tricks and my recipes. But it’s always good to see new tricks and a new approach. And in this case of Martin we’re very, very good friends. We have a very similar approach to life. I love him as a person, and he’s very talented too. And obviously he’s the big new guy of my community, so it’s amazing to work with him. And people love to see us together. This summer in Ibiza we performed a few times together unannounced, and people were going nuts.”

Equally, on the other end, sometimes patience and perseverance are required.
Guetta began work on the rock’n’roll’n’rave of ‘She Knows How To Love Me’ almost three years ago. Getting soar away vocal talents Jess Glynne and Stefflon Don to lend their distinctive voices was the easy bit. The challenge was clearing the Little Richard sample.

“Of course it was very different from his world, so it was not an easy task for him to embrace it, but we got there in the end which is a big honor for me.” he acknowledges.

A different kind of patience and vision informed the sky-kissing tropicalia of ‘Say My Name’. Guetta first met vocalist Bebe Rexha years ago, long before she guested on ‘Hey Mama’, when she was an up-and-coming writer rather than an artist.

“In the music community, especially in LA, there’s a lot of nerdy people that we all meet in the studio because you have sessions in the same studio. And Bebe was in the studio working in a different room and I was stumped with ‘Hey Mama’, and I heard her voice through the door. So I went to see her: ‘Wow, you sound amazing, do you want to try something on this?’ And she killed it.

‘Say My Name’ also features another old connection: J Balvin, the reggaeton star who’s currently the most streamed artist worldwide.
“Before that entire wave of Latin music, he and I were already working together three years ago. So ‘Para Que Te Quedes’, the other track we did together for the album, we recorded back then. We kept in touch and when I was working on ‘Say My Name’, I really wanted to do it with him, I love his unique style.”

When it comes to any and all of his collaborators – whether American hip hop superstar or fast-rising UK vocalist, DJ peer or producer peer – it’s about, he says, “getting the best out of people”.

But in terms of the Jack Back dozen, Guetta was looking to get the best out of himself, and out of his beginnings. He notes that proudly underground tracks like ‘Grenade’, ‘Inferno’ and ‘Overtone’ are the sound his own musical DNA.
“I come from that style of music. Then I wanted to grow as an artist and do something richer musically and harmonically. And this is what pushed me to make more songs, and I really have no regrets. But I did miss it a little bit. The type of music that is more about a groove and a trip than a record that is more based on an emotion due to chord progression and melody.”
Cue a cut like ‘Freedom’, which pays homage to the legendary CeCe Rogers. In sampling the a-capella from his track ‘Someday’, Guetta was "thinking of what I was playing as a house music DJ in the early Nineties in Paris. It’s really me going back to my roots.”

And speaking of the full circle that “7” represents, David adds;
It’s also why I wanted to do ‘Just A Little More Love’ again,” a rebooted version of which, with vocals by gospel singer Chris Willis, closes out the run of house, techno and tech house tracks on the Jack Back disc. “It was my first success when I was playing those underground clubs. So I was like, OK, I want this track to be there as a symbol.”
“There’s a freedom in this album. I’m happy and in a good place, and in love with the number one important thing: making music to make people happy.”