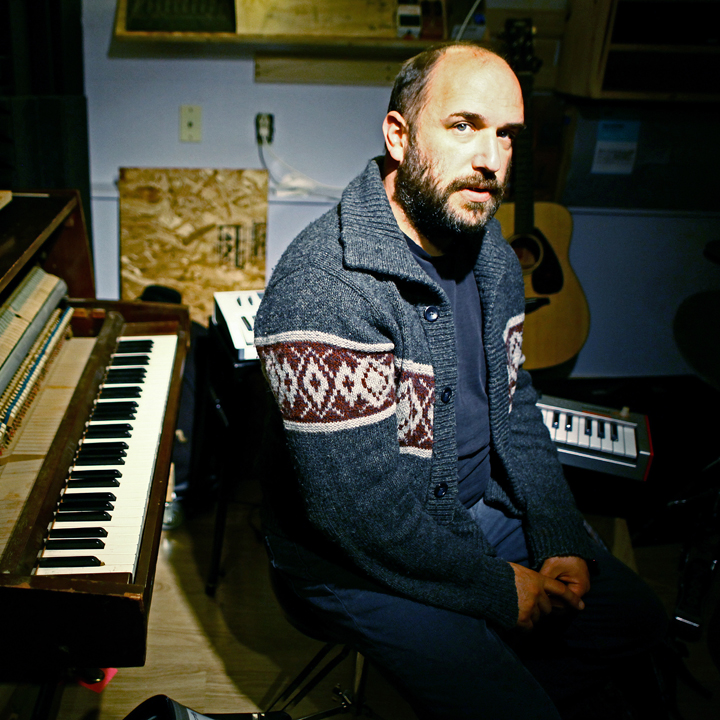 David Bazan has never had the answers. His first two solo records, 2009’s Curse Your Branches and 2011’s Strange Negotiations lived inside questions. Questions of politics, of relationships, of addiction, and of God. For anyone looking to art to remove doubt, Bazan is not that refuge. With a catalogue that orbits the darkest corners of the human experience, his songs are the tiny pinprick of light, the first breath coming up for air, the rest stop on a trip with no destination.

Under the name Pedro the Lion, starting in the late 1990s, Bazan released a series of highly praised records that documented with stark honesty the path from struggling believer to restless unbeliever. With Pedro, Bazan followed a traditional record release path – new album every two years, relentless touring, club show blurring into club show with an ever shifting line up of brilliant hired guns, showcasing his penchant for hard hitting rock and roll, his ability to imbue vulnerable melodies with guts and muscle. But it took a toll – financially, emotionally, and musically. By 2005, it was time to not just treat the symptoms, but attempt to regenerate entirely. Bazan shed the band name and set out under his own, down the long, obscure path toward some semblance of sustainability; no cure-all, no quick answer, just years of trial and error, and the patience to follow through.

In 2009 during preparation for the release of Curse Your Branches, Bazan took further steps to reorder his life on the road: he pioneered a new model for touring – living room shows. Embarking on tour after tour in the US and abroad, he alternated between these solo house shows for a few dozen people at a time and 300-500 capacity rock clubs with his band. Despite many believing it to be an unwise gamble, the house show format was a quiet triumph. Continuing to work both formats, Bazan managed to keep the rock band plate spinning through multiple club tours in 2011 for Strange Negotiations and the Control 10 year anniversary tour in 2012. As a result, Bazan became the #1 most touring artist on Billions Corp’s enormous roster, accumulating nearly a thousand shows since 2009, an achievement that brought pride, but one that left him bone tired, depleted, and unable to write.

Driven to figure it out, Bazan gave up the band and focused more on house shows. It was a natural expression of his lyrical vulnerability – take away distraction, sing some raw shit, and see who stays. Not only did people stay, more people came, and on top of the tours being successful, it rehabilitated Bazan’s desire for the road, making way for the next experiment.

Having spent half of the last decade on tour, away from home, Bazan’s new songs reflect the wandering life of a traveling troubadour. And while there is joy in that life, Blanco is born of its challenges. It’s what, and whom, he leaves at home that you hear on Blanco. Made up of tracks that were previously available in a very limited edition 7” vinyl series called Bazan Monthly, Volume 1 and Volume 2, Bazan started the project to see what kind of songs would come if he sat down in a small bedroom in his basement, propelled by a deadline, kids sleeping upstairs, and wrote from the duality that had blocked him from writing before – what it means to have a home, and have to constantly leave it to make ends meet.

At the beginning of the Bazan Monthly project, Bazan turned to northwest indie-rock veteran Yuuki Matthews, who both co-produced Strange Negotiations and co-founded celebrated indie band Crystal Skulls, to help craft the endeavor. “I walked in thinking that we would have to scrap all the ideas I had as

garbage once he heard them” says Bazan. “Instead he said ‘these are great, let’s get started.” Over the next twelve months the pair would record over a dozen songs together, ten of which comprise Blanco. These are home songs, songs about returning, songs about not quite knowing what it means to return.

They long for home with the ache of a child, and they dissect that longing with a surgeon’s precision. They also signal the end of the organic singer/songwriter mode that he never loved but seemed to be mired in anyway, with delay and distortion binding layers of drum machine and synth together. Guitar comes in as a sweet reminder of where he started, but stays sparse. Blancocontinues to ask questions, but they are the questions of a man who has found contentment within them. Who has somehow, against odds, made a home in them