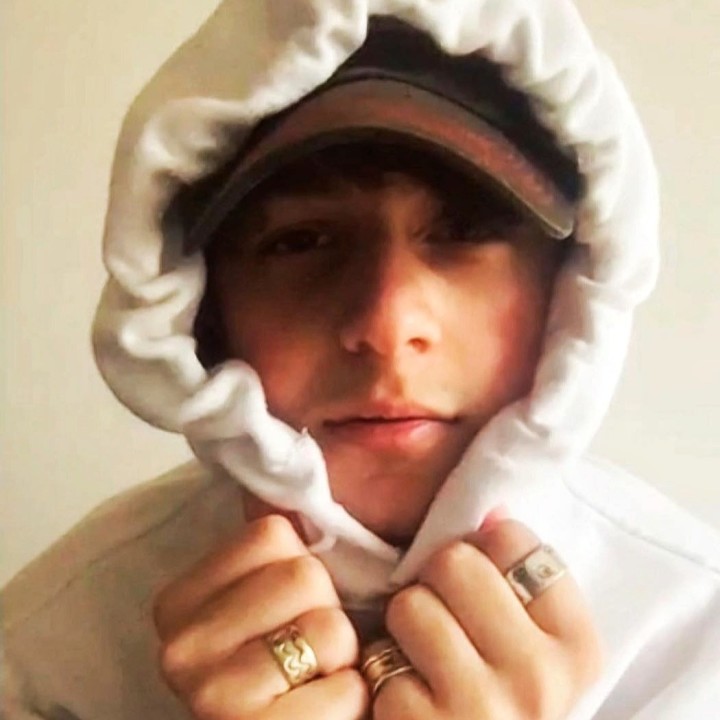 For Daniel Briskin, singing, songwriting and producing go hand in hand. Since the age of eight, when he started playing the piano, the now 17-year-old has taken full creative control over his music and image; developing his own aesthetic that takes cues from some of music's biggest multi-instrumentalists, including Frank Ocean, James Blake and Tyler, The Creator.

Born in North London, Daniel attended the Sylvia Young Theatre School and performing arts college ArtEd before enrolling at the British and Irish Modern Music Institute (BIMM), where he's currently studying vocal performance while writing and producing his own music. Admitting that he "didn't ever properly fit in at school," BIMM, he says, has given him confidence in his music and the art of live performance. "I've always loved music, he says. "I knew I wanted to go to music school, but I never had that much motivation to do well at school. I've since become a lot more confident on stage. I feel like it's a lot harder to perform your own work because you're almost baring your soul. It's daunting."

The sound of Daniel's "number one inspiration," Frank Ocean, is stamped all over his debut EP, 'BRSKN.' A smooth, poppy and occasionally emo collection that feels fully formed on arrival, he describes it as "a mix of my take on what current music is doing right now as well as of all the things I love." That mix also includes the records he grew up listening to, including Amy Winehouse's 'Frank' and J Cole's 'Forest Hills Drive.'

The collection's lead single, 'Colder Homes,' blends his wistful R&B croon with sparse electronica and subtle pop hooks that recalls the likes of Khalid and Kehlani. Featuring rising London rapper Alista Marq, the track's deliberately cryptic subject matter is inspired by Frank's own flair for ambiguous lyrics. "I like songs that mean something different to everyone," he explains. "I don't like it when artists tell you how you should feel in a song. I try to keep things balanced between the vague and specific so people can form their own opinions on the songs. I think that's missing in pop culture today. Everything is loaded with messages."

One thing that does resonate lyrically in Daniel's music is life as a teen in Generation Z. Another standout track, the swooning alt-R&B ballad 'Want,' he wrote when he was 14 and is about "a boy who is just starting to like someone and feeling that first journey into romantic relationships." Elsewhere, the hypnotic 'Pray For Me,' is about "how you can be manipulated easily in relationships," while the sunny, hook-laden 'Hideaway' wouldn't sound out of place on Drake's More Life album and encapsulates his own personal take on the recent dancehall explosion. Rather than telling a story, Daniel says he likes to create songs that can "make someone feel a certain way and convey an emotion even if you're not telling someone how they should be feeling."

As well as a singer-songwriter, Daniel is also a self-taught producer, citing Mura Masa ("I think he's just so inventive"), Blood Orange ("he's inspired me to use my guitar a lot more") and Chet Baker's classic 'Sings' album as key influences. But like the question often posed by the iconic jazz record, does Daniel see himself more as a singer who can produce or a producer who can sing? "I knew what I wanted to do from a young age, I just didn't have the means to, so I taught myself," he explains. "As an artist, the only way you can properly do exactly what you want is if you create it. For me, producing comes as a natural part of the song creation process."

As well as producing his own music, Daniel is already collaborating with other up and coming acts because, he says, "It's interesting to see how versatile you can be. My own music is so personal, I think it's important to have a break from that and work with other people on something totally different." And the act he dreams about getting in the studio with one day? "I would love to collaborate with Tyler, The Creator. When I was 14 I was listening to a lot of his Odd Future stuff and everything I wanted to do musically just came together in my head during that time."

Fashion also plays a key part in Daniel's aesthetic -- rooted in skate and street with a UK twist -- while his self-made videos and even the artwork for his BRSKN EP take cues from the homemade-meets- hi-res visuals of 88rising's Joji and US rapper Trippie Redd. "I've never had someone to do videos for me, so I've always done them myself," he says. "I'm really into making the lo-fi, abstract stuff at the moment. Honestly, I don't really know what I'm doing half the time -- I feel like I'm just winging it. But what else can I do? I'm only at the beginning."