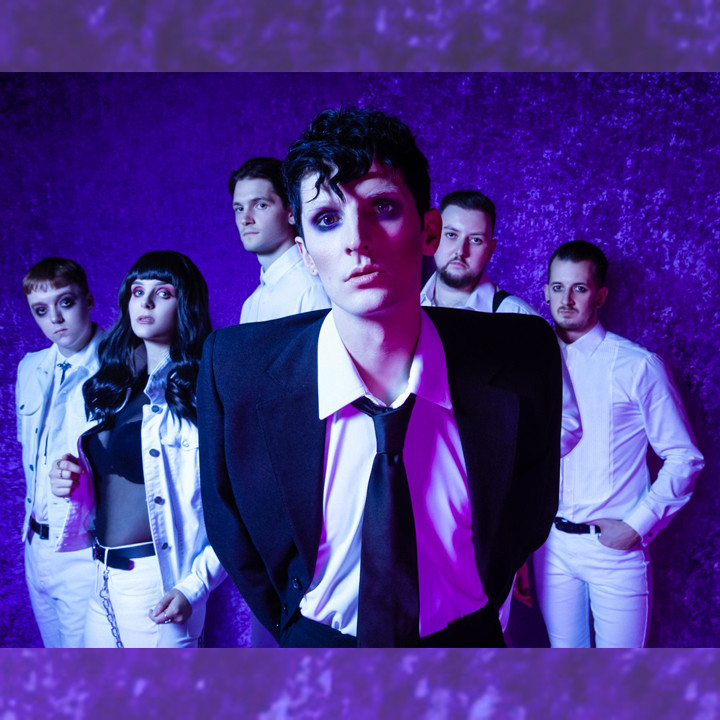 In a world where so many bands are content to cower amongst the safety of the middle of the road, it is clear that Southampton's CREEPER are driving on an entirely different street altogether.

With the release of their expansive, ambitious, feverishly-awaited debut album 'ETERNITY, IN YOUR ARMS,' the Southampton Six are once again pushing hard against the boundaries of the art a 'punk' band can be expected to produce in 2017. As the third in a trilogy of records loosely based around J.M Barrie's Peter Pan, 'ETERNITY, IN YOUR ARMS' sees the band wrestling with existential crises, personal failures and emotional desolation via the kaleidoscope of a richly drawn narrative tapestry.

"With [2015's] The Callous Heart EP we wrote a bunch of heart-broken love songs based around Peter Pan's The Lost Boys," explains singer Will Gould. "The Stranger EP was full of more fearful songs about the things that terrify us -- linking back to the Tick Tock Croc. With the album there is a combination of both of those things, but the majority of the record is about addressing those concerns -- things we've been through in our real lives -- from a very immediate, present standpoint."

The main human protagonist of 'Eternity...' is James Scythe, a private investigator who travels to the South Coast to debunk the legend of 'The Stranger' as well as putting his own demons to rest -- but then mysteriously disappears. Such is the detailed, immersive experience that the band -- completed by guitarists Ian Miles and Oliver Burdett, bassist Sean Scott, drummer Dan Bratton and keyboard player /vocalist Hannah Greenwood -- have built in the mere two years since their inception, that fans know not only the hotel Scythe stayed at in Southampton but the specific room number, as well as having access to a library of podcasts by him and a network of websites he frequented before seemingly vanishing into thin air.

It should be abundantly clear by now that CREEPER is not just a band -- it is a labyrinthine rabbit hole of a world as populated, detailed and dense as your imagination is prepared to make it.

"Building this immersive world that people can fully engage in has always been an ambition for us," confirms Gould. "We want people to be able to almost physically step into what we've created; to see The Stranger and James Scythe right in front of them. We have been meticulous with those ideas." Indeed, the band's aesthetic is a precisely honed blend, which draws on everything from the surreal flair of David Lynch to the sci-fi shock of The X-Files, the gut-twisting horror of The Exorcist, the camp technicolor of Baz Luhrmann's Romeo and Juliet and much more besides.

The soundtrack to this world is equally diverse. Ostensibly a punk band, CREEPER's sonic palette draws on everything from Alkaline Trio and Jawbreaker to Meatloaf, David Bowie and Queen. Take debut single 'Suzanne,' for example -- a song already championed by none other than Elton John. "'Suzanne' has many different elements to it," says Gould. "There are nods to lots of different things in there: the sex noises in the middle eight, a chorus that sounds like it's from The Rocky Horror Picture Show, an Offspring verse and moments that are almost pantomime. It encapsulates the aspiration and variety of the record in one song."

It's a variety that is reflected at every turn across 11 bold, brave anthems -- no more so than on majestic slow-burn of closer 'I Choose To Live.' "It's one of the most personal, emotional songs we've ever written and the only time we come away from metaphor and simile and really address our audience directly," surmises Gould. "Writing a song specifically for a person or a group of people is a challenging experience, but we wanted to offer them that. I want our band to be a safe, caring space where people can get some respite from whatever is ailing them."

Elsewhere, religious imagery abounds across 'Hiding With Boys,' with Gould warning us in his ever-distinctive baritone that "Heaven knows/Hell's gates are near."

"I was listening to Arcade Fire's 'Neon Bible' a lot during the writing process, " he notes. "And there is a lot of religious imagery on 'Eternity...,' particularly purgatory.The physical manifestation of having to deal with what befalls you."

Yet CREEPER's stylistic leaps are not limited to thematic through lines or punk-goes-flamboyant posturing: they are considerably more wide-ranging. "We wanted to draw from a place that wasn't just focused on the contemporary but brought in traditional songwriting techniques," says Gould. "The way those songs you hear when you're at a wedding or a birthday work -- those songs that are in the collective consciousness. What's been really fun has been our development as a group. When you think of a band like Fleetwood Mac you think about a broader collective of musicians all contributing and that's what we wanted too."

Certainly, the rich orchestration that characterizes 'Eternity...' -- everything from trumpets and strings, to keys, spoken word poetry and close vocal harmonies is testament to this drive, but nowhere is it more strongly realised than on 'Crickets,' a song which sees keyboardist Hannah Greenwood come to the fore for a stark, stripped-back and utterly affecting vocal performance."It's my favourite song on the album" admits Gould. "It crosses a lot of personal boundaries for us. Hannah's contribution on this album as a multi-instrumentalist has been enormous and I think that song is one that will stand out for people."

Yet there is plenty that long-term fans will acknowledge as familiar here too, 'Room 309' (James Scythe's aforementioned hotel residence) finds the band in an adrenaline-fuelled sprint, before opening up into a deftly-plucked duet, while 'Darling' ably demonstrates a mastery of four chord punk songwriting that the band have now sharpened to a laser-guided point. It is a canvas painted with the unashamedly bold strokes and in a multitude of colours.

Perhaps most pleasingly, CREEPER have not simply re-hashed the past glories of their two (glowingly received) EPs, but sought the kind of self-reinvention. There is a truth, honesty, lyrical skill, musical guile and skyscraping purpose coursing through these 11 songs which is almost impossible to ignore. With one of the fastest growing and most rabidly dedicated fanbases around, CREEPER are energetic, eccentric and, once you suspend your disbelief and enter their world, utterly compelling.

"In some ways, literally everything is a pantomime with us," concludes Gould. "But that is our way of drawing you in so we can talk about all these things that really matter. These are story telling devices and that is the sleight of hand we are always trying to play. We are trying to put a coin in your hand and make it disappear right in front of you."

And with burgeoning recognition and indelible artistic vision already the order of the day one thing is for sure -- there is definitely something magical happening.