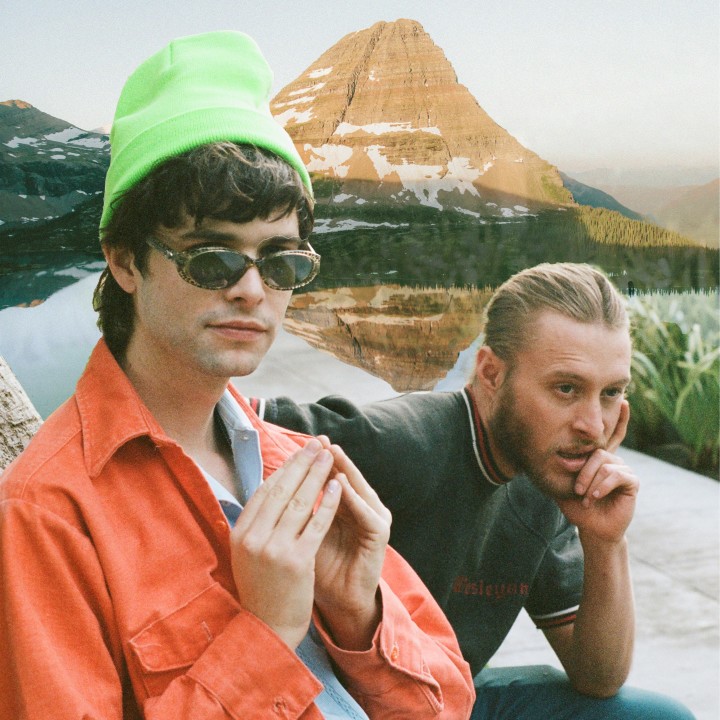 Sometimes the only way to get ahead is to stop following the leader, and start running your own race. Coast Modern flies out of the pack with a refreshingly uninhibited sound for disenchanted dreamers everywhere. Building on an admiration for the spirit of misfit alternative bands and the fearless ethos of modern hip hop, the duo creates alternative pop with a wink that aims to push the genre into the future. Seattle-native Luke Atlas and LA-local Coleman Trapp met while working as Los Angeles-based songwriters, fellow rats in the race to land songs with mainstream pop artists. After more than two years of peddling some great, some terrible, and some very weird creations at the gates of the mainstream, they received little more than fleeting glances. Watching so many of their creations die on the operating table left the two burnt out and questioning their path. With just a backpack and a tape recorder, Coleman escaped his over-saturated hometown for the mountainous serenity of Denver, CO. What was meant to be a quick, head-clearing vacation soon turned into months as Coleman blended into the community, taking a job at a family restaurant, and enjoying the simple pleasures of a "normal" life. "I realized I didn't desire the trappings of music industry success that drove me for years," recalls Coleman. "I actually started thinking I might never go back." Without the pressure of writing-on-demand, he began messing around on a borrowed acoustic guitar and recording tossed-off ditties on an old cassette recorder. The pure, child-like enjoyment of writing only for himself led Coleman to a realization: maybe he'd overlooked a path that was right in front of him the whole time. Soon, warbly tape recordings began appearing in Luke's inbox. "At first I didn't think much of them because they were so different, but they kept randomly getting stuck in my head" says Luke, who further encouraged Coleman's experiments. On a whim, Luke created a production around one of the acoustic demos and sent it back. Coleman was thrilled. "It felt like this could be something," says Luke. "I told him to get his ass back to LA." Returning with renewed vigor and a rusted-out car hood after a Mile-High winter, Coleman quickly called a meeting with Luke. With their new musical experiments buzzing in their heads, the pair discussed creating a personal project based purely on the whims of their creative spark, wherever that led them. "After we stopped shooting at an invisible moving target and had no agenda, that's when the sound came," explains Luke. And Coleman, who had not so much as even sung "Happy Birthday" until a few years prior, began finding the confidence to take frontman status, lending his vocals to the tracks that began to take form through a playful, stream-of-consciousness process. One of the first songs they plucked from the ether together was "Hollow Life." An anthem for restless souls everywhere, the lyrics drip with the same frustration the duo once felt for their city, while Coleman yearns for a simpler life away from it all. "Racing towards a dream on the horizon / Gimme something better than this Hollow Life," he sings over plinking marimba mashed up with angular fuzzy bass and booming 808 kick drums. "The song is about finding distance from what is hindering you, whether it be physical or mental distance," explains Coleman. "But we're no gurus. We're just trying to let people know that we're here figuring this shit out too." On the other end of the duo's musical spectrum is the bouncy tribute to nascent romance, "Dive" and the psychedelic, "Comb My Hair." Digging deeper, there is the group's wistful meditation on the passage of time, "Wild Things," and, "Frost," crackling with imperfection from Coleman's original Denver basement tapes. Clearly Coast Modern are capable of covering a large swath of musical territory, yet a strong, self-aware voice and a sense of groove tie them all together. With their destiny now grasped firmly in their own hands, the duo are reveling in the freedom of their newfound artist status. At the will of their muses instead of the tidal flow of the pop world, the group can create the genuine, self-assured music that had been locked inside. Coast Modern is what happens when you let go of what you always thought you wanted and embrace the unexpected; when you stop chasing and start taking the lead.