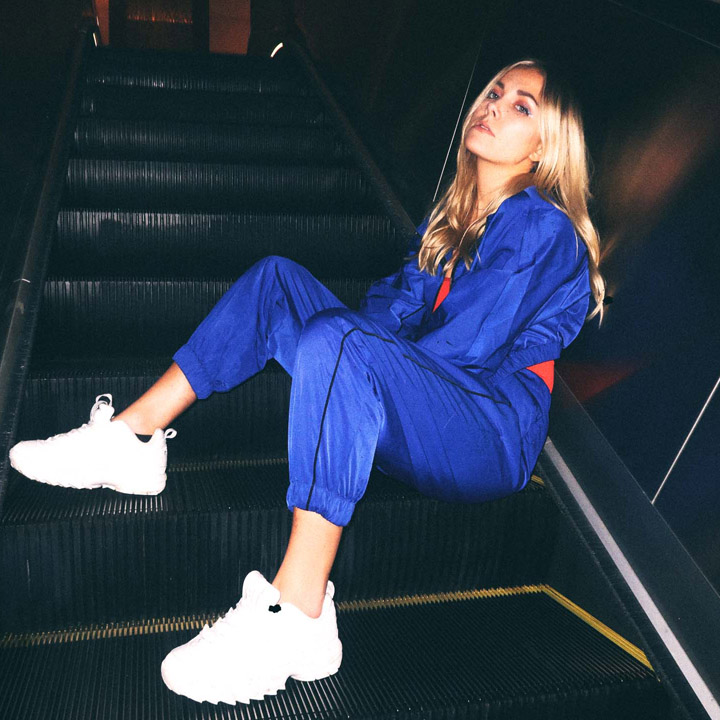 The most direct statement will often be the most impactful. Recognizing this truth, pop singer and songwriter Clara Mae cuts right to the chase in her music. The artist's lyrics play out like a no-holds barred conversation between best friends amplified by her gritty jazz timbre, uncontainable ambition, and kinetic spirit. As a result, her sharp and succinct storytelling shares the spotlight equally with jaw-dropping vocal prowess, making for an instantly identifiable style.

"I don't want to be too poetic," she affirms. "I want people to be able to listen to my songs, understand them, and feel like I'm singing about their lives. It should be like we're having a conversation... as if I'm speaking right to you."

She started to cultivate that approach as a child in the small town of Gävle, Sweden. Her musician-producer dad built a recording studio in the basement of their house, which intrigued the budding songstress at just eight-years-old. Throughout grade school, she spent countless hours recording covers of Robyn and Whitney Houston in addition to writing material of her own. Post-high school, she studied jazz and improvisation at a conservatory for three years. Drawing inspiration from the likes of Etta James and Charlie Parker, she unlocked her soulful side and mastered improvisation -- coming in handy during sessions where she would often be asked to sing on the spot.

Signed to a publishing deal in Stockholm at the age of 19, she spent countless hours in studios throughout the city.

"It was a grind," she recalls. "I was doing sessions seven days a week. That's how everything started though. I never had any plans to work in anything else but music. That was what I wanted to do forever."

A writing session in Stockholm yielded the song "Taped Up Heart," which was quickly picked up and released by Norwegian production and DJ duo KREAM with Clara featured on vocals. Within a year, it clocked over 100 million cumulative streams and soared to the Top 25 of Billboard's Hot Dance/Electronic Songs Chart. Simultaneously, she wrote with everyone from David Guetta and Martin Jensen to Tiësto.

Signed to Big Beat Records, she dove into crafting her debut EP, Sorry For Writing All The Songs About You. The conceptual six-song set unfurls the story of a turbulent relationship -- from falling in love at first sight and breaking up to regretting the outcome and ultimately moving on. All six tracks would be co-written by Clara and longtime collaborator Cassandra Ströberg who both happened to enjoy a similar dating history...

"We were sitting at a coffee shop in Stockholm, and we realized we kept talking about the same doomed relationship," she recalls. "That's when we came up with the title, Sorry For Writing All The Songs About You. We planned out all of the stages of a relationship. First, you're really happy and in love. Everything is so perfect. Then, you start to doubt it and wonder if the grass is greener on the other side. So, you breakup, but there's regret as you don't see why you ended things in the first place. Finally, you're over it and can start again, which explains the title."

She preceded the EP with her single "I'm Not Her," which tallied over 13 million plays on Spotify. Meanwhile, the follow-up "I Forgot" quickly cracked 11 million streams in a few months' time. Critical acclaim came right away from Refinery 29, Culture Collide, Billboard, Idolator, and PAPER who proclaimed her among "100 Women Revolutionizing Pop."

"Better Me Better You" [with Jake Miller] illuminates her dynamic range. She locks into an unpredictable groove with Miller over a shimmering sonic backdrop punctuated by effervescent percussion, glitchy electronics, and subtle guitar.

"On that one, you're missing the ups and downs of the old relationship," she sighs. "I don't like it when it gets too safe, because I'm a drama queen," she laughs.

The EP's fourth single "Rooftop" begins with an orchestral chime as her breathy delivery transfixes during the verses. Representing her "empowering side," it culminates on the pensive, powerful, and provocative refrain, "Up on that rooftop, you told me that you don't care, turn all the lights off, so where do we go from here?"

Ultimately, she's only headed upwards. By holding nothing back, Clara Mae's about to start a lasting conversation with listeners everywhere.

"I'm just a very energetic, happy, and hardworking girl from Sweden who loves music," she leaves off. "I hope listeners can relate and the melodies get stuck in their heads. That's what my favorite songs have done for me."