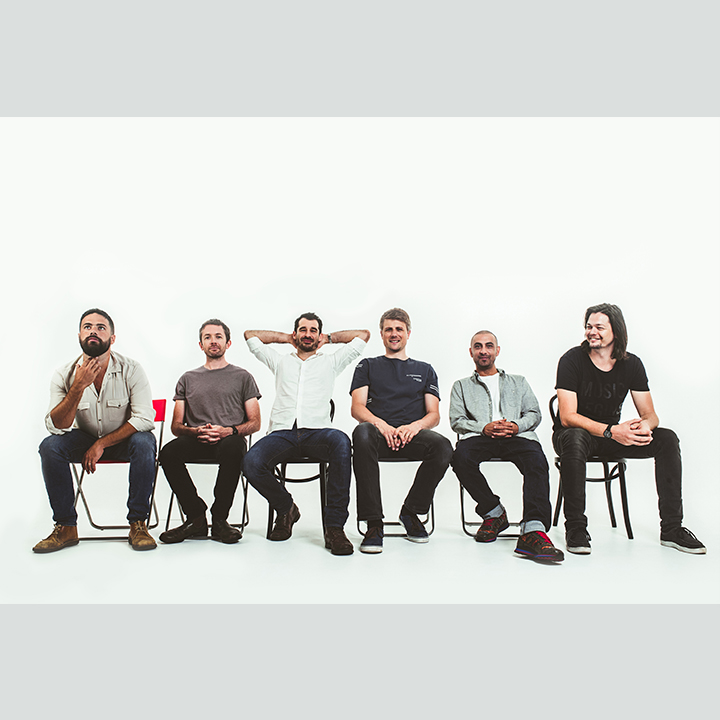 While seemingly distracted by our own deep love affair with the band, The Cat Empire have steadily become one of Australia’s most successful musical exports. Garnering frenzied devotion across the globe the band regularly generate more international business than any of their local peers, all without anyone at home really noticing.

Hardly ones to boast (they are Aussies after all), the six bound together by a love of music since their teens have gone humbly, yet deliberately about their business. That business is crafting infectious, genre-embracing anthems, releasing them on chart-topping, multi- platinum selling albums (both on major labels and independently), and playing hundreds of world class, awe-inspiring shows a year, all the while sustaining and growing an army of ardent fans at home, and in even larger numbers, across the globe.

It’s not unusual to find the band mobbed by fans and media at airports in Spain, appearing live on iconic TV shows hosted by the likes of Letterman, Leno, Wogan and Ferguson, riding high at the business end of international album charts, dominating airwaves and main stage bills at all of the iconic international music festivals you wished you could go to, Glastonbury and Bonnaroo included. It seems The Cat Empire brand of feel good, high-energy, smile- inducing, euphoric roots pop that we all know and love, has had a global address when it comes to the winning of hearts.

When asked about the overseas reception offered the band, The Cat Empire co-lead vocalist and songwriter Felix Riebl explains, “at some level I think that The Cat Empire appealed to our Australian audience because the sound was influenced by so many different places. But when we went abroad our international audiences heard something distinctly Australian about us. It meant our music could travel in a really interesting way. What’s amazing for us, is for all of the love we get from our home crowds, and there’s been plenty, support for the band overseas has continued to grow. It’s exciting.”

From the very get go, and off the back of a hugely successful, double platinum debut album, The Cat Empire’s sights were set on international climes. An early invitation to play in the U.S. coming out of one of their very first Australian shows whetted the appetite for the sextet and put in motion a plan to devote as much energy to international touring as they did at home on the road. The results elevated The Cat Empire’s status, and demand as an international commodity as reflected in the achievements that the band were rapidly stacking up. Culminating in the opportunity to record their second album Two Shoes in Havana, Cuba.

As Rob Zifarelli from Paradigm Talent Agency, the band’s agent for North America observes, “The Cat Empire are one of the best live experiences ever and because of that their fan base only grows, never diminishes. From New York to Montreal to San Francisco to Vancouver and beyond. It is pure JOY on stage and the audience feels a part of that. These guys seem to showcase what it means to be Australian. They are vibrant, talented, self- deprecating, original, and world class.”

Early forays into the European market fruitful with the high rotation airplay secured on the prestigious BBC Radio 1 for the single ‘Two Shoes’. Further exploration by the band into the US, and then into Canada saw the band completely sell out their 2005 tour, in the process setting themselves up for key festival dates the following year. The band featured on Bonnaroo (USA), Toronto & Montreal Jazz Festivals (Canada) Nuke, Quart, Edinburgh Festivals (Europe) and Summersonic (Japan), plus their own headline shows across the world. The following year while at the same time being profiled in Rolling Stone in Australia, the band appeared on the front cover of U.S. music trade publication Pollstar, further cementing their recognition stateside as major international players.

The band’s album releases continued to have significant chart impact across the globe, with their 5th, Steal The Light, the first to be released on the band’s own independent global label Two Shoes Records after a decade on a major label, achieving top 20 chart debut in 5 countries including Canada, Switzerland, Germany, Holland and of course in Australia. The album, the first release on their global independent label, triggered more touring including the band’s first shows in Rio, Sao Paulo, and South Africa. Festival credits stacked up in North America with headline spots at Montreal Jazz, Calgary Festival, Winnipeg Folk Festival, Ottawa Blues Festival and Vancouver Jazz Festival.

After even more international travel, and another prestigious full houses at every stop, including this time at the Royal Albert Hall in London, the band released their 2016 album Rising With The Sun. The album debuted Top 10 in 7 countries including; Australia, Romania, Hungary, Sweden, Canada, Czech Republic, Switzerland and Top 20 debuts in 16 countries including; Malaysia, New Zealand, Netherlands, Germany, Denmark, South Africa, United Kingdom, Portugal and Spain. The debuted at #9 on the Worldwide I-tunes charts.

Now as the band regather after a break from the road, and on the eve of a brand new album, the loftier global peaks our musical adventurers have unfurled their feline emblazoned flag upon are sure to continue to accrue. Perhaps now though they might be a little more ready to let you know about them, but then again, we kinda doubt it…