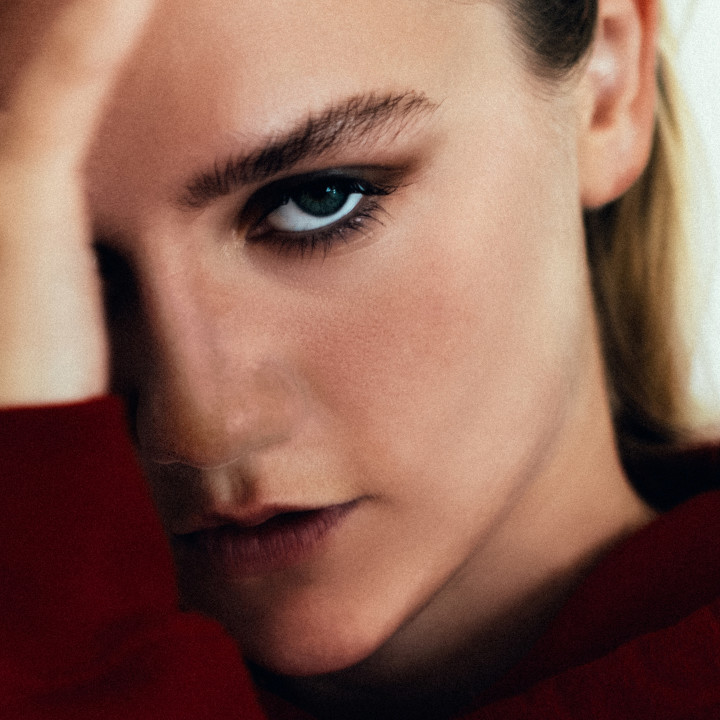 As far as rising music artists go, Carlie Hanson is a phenom; her second single ever, the self- released "Only One," has amassed a staggering 55 million streams (and climbing). That buzz alone secured her a supporting spot on the tours of Troye Sivan and Yungblud, and ultimately a record deal with Warner Records.

"It's just so unreal," she says taking in the last year. Before being signed, Hanson was working at McDonald's in her hometown of Onalaska, Wisconsin. "Literally everybody I know has a job in food or retail," she says, reflecting on her humble beginning. Don't worry though, LA hasn't changed her -- "I'm still that same bitch." But, obviously, things have changed though.

In just over a year, Hanson has packed years' worth of adulthood-defining milestones into one; she now lives full-time in Los Angeles, in her own apartment, found a community of friends, fallen in love and quickly out of it, and upgraded her old Toyota Corolla to an Audi. "I went from living in a city of 18,000 people in Wisconsin to the middle of Studio City in LA -- all by myself, no sisters, no mom, no dog." Naturally, themes of self-discovery and love have seeped into her lyrics.

"This the kind of love they say is wrong / this what I been waiting for so long," she sings on her latest release, "Back In My Arms," which she wrote at the height of being in love for the first time -- "butterflies flyin' out my ass," to be exact. In the summer of 2018, she made a Twitter announcement about it: "I just told my mom so now I wanna tell the world lol.... hello everyone! Yes, I have a beautiful girlfriend." The relationship ended, and despite the proclamation, Hanson isn't quite ready to slap a label on her sexuality. "I mean, why does everything need to have a label?"

The track comes off her forthcoming EP, Junk, which describes where this record started not where it ends. "These songs mean so much to me and have so much meaning to them, but I didn't want the title of my EP to be something so thought out. I wanted it to be simple," she says, adding, "Really each of these songs started out as a quick stupid melody I came up with in the shower, or while I was high, and just threw in my voice memos! Sometimes I'll think of a concept and just quickly jot it down in my notebook. Or like with 'Hazel,' I had a bunch of lyrics from that song in the back of my notebook forever and had never done anything with it."

"Hazel" is a Carlie Hanson fan favorite, a track she's performed often live, but never officially released. It follows a true story of Hanson's friend falling back into drugs and into a group of misguided friends. "I am so fucking thrilled to finally be releasing Hazel. I've been performing and talking about this song for the last 40 years it feels like! HA! I know that this song has done some good for some people. As a songwriter, that is all you can hope for." While "Hazel" addresses a friend, another Junk track, "WYA," short for where you at, hears the singer confronting a future version of herself, one lost to the fame monster.

"Yes, of course I am super grateful and excited for what lies ahead for me, but I am also scared of the future too -- who isn't?" she ponders. "Writing this song was like a therapy session for me... it was somewhat hard for me to write, just because of how vulnerable I had to be, but it was very cathartic as well." "Cigarettes," another Junk track, tackles a similar therapy.

"I feel that over the past year and a half I have learned so much about myself. I haven't felt this confident since I was very young and I'm guessing that has a lot to do with how open and honest I have been with myself while writing."

For all the aforementioned life events she's conquered, Hanson knows it's come with the help of those she's brought into her life. "My encouraging family, friends, and amazing team behind me are never afraid to tell me when I'm being stupid or when I'm not acting myself. I wanted to write this song for myself so in a couple of years, I can listen back and remember that I'm still the same 18-year-old girl at heart who wrote that song."

Though now 19 years old, Hanson still belongs to Generation Z and their collective DGAF attitude towards the paradigms before them. Like her contemporary Billie Eilish, an oft- comparison, Hanson has grown up with a pop culture buffet at her fingertips, a consumption that has created a new culture in music; Genres are cliché, pop perfection unappealing, and worshipping idols is cooler than being one. "When I was younger, I had fan accounts for Justin Bieber. That was my world...I would have died if he actually liked or replied to me."

There is an undeniable sonic presence of Bieber in Hanson's work, but with the attitude of Kurt Cobain. Aesthetically, she's streetwear meets grunge -- think bleach-blonde disheveled hair, oversized pants, jackets, and hats, and a penchant for tour tees and flannel. This world of rock is no doubt an influence of former tour-mate Yungblud.

"Out of everybody I've been around in the last year, he's just the most amazing person and so real. The first show I saw of him, I was just shocked at how he spoke to the crowd, how he moved. After seeing him I was like, "I just got to be me. When you're on stage, you just have to act how you feel. You just have to go crazy."