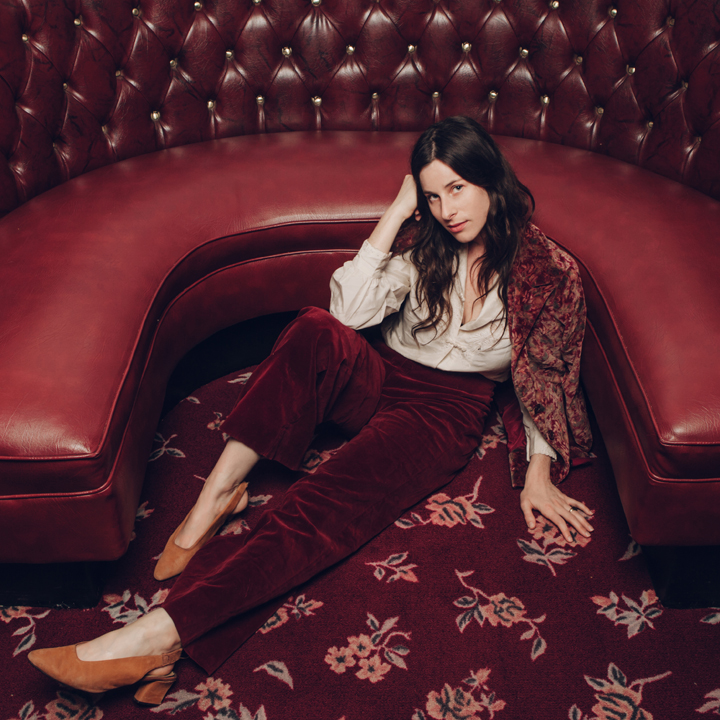 Buzzy Lee is the new artist project of Los Angeles performer, writer, and actress Sasha Spielberg. Sasha is a storyteller by nature, and as Buzzy Lee, she demonstrates a rare ability to detail a dark scene in just a few words - the novels within the margins, the stark, vivid characters she portrays. She's also a humorist, a writer and singer capable of depicting poignant scenes awash with sorrow and sarcasm, phrased savagely and delicately, her voice at times plaintive, at other times soaring.

Buzzy Lee's debut EP Facepaint, produced by acclaimed electronic artist and frequent collaborator Nicolas Jaar, is a collection of five songs that began, in true Sasha fashion, as voice notes on an iPhone - vague impressions, fraught with restlessness and self-doubt. If you know Sasha, you know that she is equally hilarious and pensive, disarmingly self-deprecating, as comfortable entertaining as she is prone to ruminating. So, of course the collection of haunting melodies on Facepaint derived from and existed primarily as a collection of random voice notes - wistful indulgences, gentle jealousies, interactions reenacted and reexamined.

Talking about the early sketches that would become the Facepaint EP, Sasha explains, “'New Recording 4091' was the thirty second morsel of a melody that made me realize I had a problem with avoidance. On 'New Recording 2072,' I found my distraction through falling in love. On 'New recording 3176' I had found a distraction through the vortex that is Google search, ending up on WebMD - but I knew I had to finish a song my own. And really finish it - which was maybe more terrifying than my WebMD diagnoses."

This is when Sasha’s longtime friend Nico came in, to accompany her in her distractions, traveling the path of her whimsy, following her fantasies and seeing them through - someone who knows both sides of her; the nostalgist and the comedian, the entertainer and the escapist - Buzzy Lee.

"Nico provided the safe space within our always effervescent friendship and creative relationship," she explains, of her partnership with longtime friend Nicolas Jaar. "I ate sandwiches and cried and laughed and reflected and reverted to childhood and here are the songs that sprung from those two weeks lying on Nico’s living room floor. I hope you enjoy. Here’s to finally titling voice notes."

Since releasing her first single "Coolhand" in February, Buzzy Lee has picked up fans at KCRW, i-D, Gorilla vs Bear, Stereogum, and the LA Times, who reported "with a voice that can gracefully maneuver across octaves, Buzzy Lee fills her measures with dramatic flourish that recalls British singer Kate Bush."