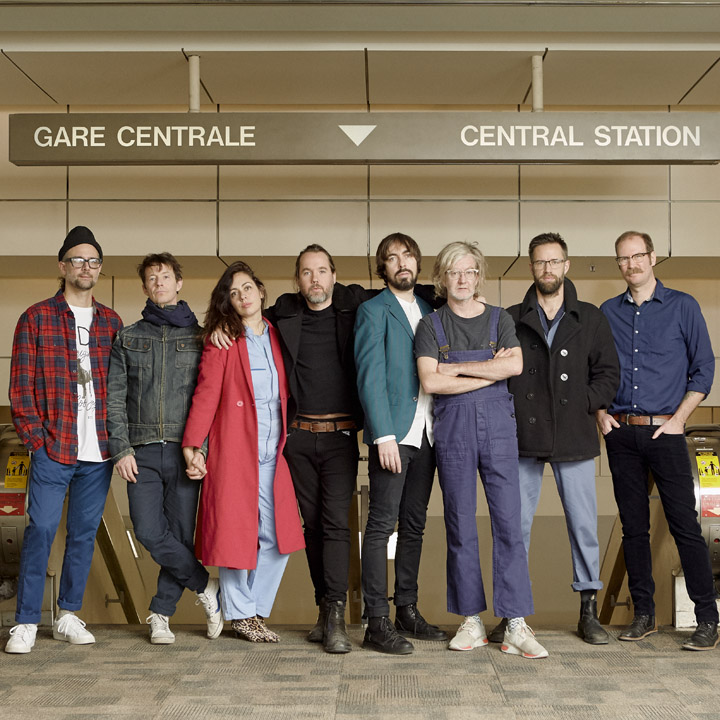 It feels like a wonder that Broken Social Scene have 10 new songs -- an album’s worth of joyful, transcendent, open-hearted music -- ready not even two years after the release of their brilliant fifth album, Hug of Thunder? “Two years seems quick to be honest,” says bassist and co-founder Brendan Canning. “With so much going on in everyone’s world when two years passes the concept of time takes on a different meaning. Two years feels like two months. At least it did for me.”

“Two years is right away for us!” reckons Kevin Drew, singer and Canning’s co-founder. “The band is focussed and our mission to continue has stayed intact. In the idea of keeping going we decided to put these EPs together with songs that could not fit on Hug of Thunder and some that were recorded in new sessions.”

So why a wonder? Because Broken Social Scene is less a rock band than an embodiment of an ideal of music. Broken Social Scene can be 17 musicians, brought together in search of a common goal -- a unique clearing house for many of Canada’s most talented musicians -- or Broken Social Scene can be the smallest, most intimate affair. Their two new EPs, Let’s Try the After Vols 1 and 2, celebrate every facet of their creativity. The surging, epic BSS is present on “Can’t Find My Heart” and “Remember Me Young”; the hushed and sombre BSS takes over for “Boyfriends”, “1972” (with a gorgeous, breathtaking vocal from Ariel Engle) and “All I Want”. “The Sweet Sea” and “Memory Lover” are ambient mood pieces. “Big Couches” and “Let’s Try the After” exhibit their gift for pop that refuses to sit still, that combines experimentation and melody.

“The studio has always been an open format to explore and that creates a lot of opportunities to keep gathering our emotional content,” Drew says. “This batch is a more focused crew.” The focussed crew could apply to the line-up for the EPs, too. While Hug of Thunder, a return after a seven-year absence, featured the whole floating membership, the Let’s Try the After EPs were recorded with a less sprawling line-up. “BSS has always been a band of happenstance,” Canning says. “Whoever happens to be around when a song is being created, well they become the creators as well.” Whoever is present, though, these EPs capture the spirit that some members had felt was dissipating before the group’s hiatus after 2010’s Forgiveness Rock Record. “The spirit really comes down to whether you’re dedicated to trying to be a part of something magical or not,” Canning suggests. “If we’re trying to create music that will hopefully find a place in people’s lives, you’d hope a band you liked would be dedicated to that idea or concept. I believe there is spirit amongst us right now.”

There’s a fleet footed-ness about these records that reflects the way they were made. “1972”, for example, was recorded aboard Howard Billerman’s school bus-turned-portable-studio when Broken Social Scene appeared at the Osheaga festival in Montreal. “Boyfriends” was an old song given a new direction by producer Nyles Spencer after the band couldn’t nail it during the Hug of Thunder sessions. “The idea behind that song comes from the failure of to keep their word,” Drew says. “Relationship failures due to historic ignorance. It falls into the fall of man category. Trying to love within the struggle of multiple choice is also a theme within “Can't Find My Heart”. The zeros and ones dictating sex and companionship. Not knowing how to feel: knowing how to do it -- to love -- but now how to feel it.”

These are nakedly emotional songs; they are songs that celebrate life in all its complexities -- and which also, by extension, celebrate the very act of carrying on, for Broken Social Scene as a band and for us in a fractured world. “The theme is to continue,” Drew says. “Sickness, suicide, uprise, love, death, betrayal, hurt, joy, sex, communication, battles and divisions… Let's just get to their after and start building again. How do we do it within the isolation of self-prescribe empty popularity? How does the ego revolt? How does the heart win? Can it? Maybe after we will find out.”