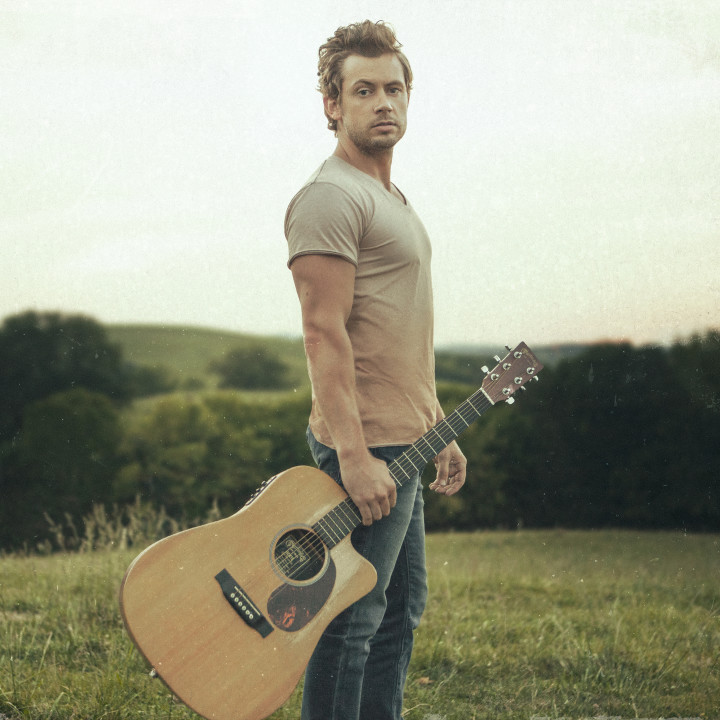 Growing up in Jackson, Tennessee, Brandon Lay lived out the songs of John Mellencamp, Alan Jackson and Bruce Springsteen. He played sports during the day, fixed up cars after school and eventually wrote down his experiences in song, telling not only his story, but the story of other kids raised in small town America.

Now signed to EMI Records Nashville, he's able to share those songs on a grand scale, beginning with his autobiographical debut single "Speakers, Bleachers and Preachers." Inspired directly by Brandon's life, the song spells out right in its title the three chief influences that shaped him. There was always country music on the radio, he played basketball, football and baseball, and his dad spread the gospel on Sundays as a minister.

"Between going to church and playing sports, there was always a lesson to be learned," says Brandon. "And country music lyrics are all about life lessons. All of that helped me figure out who I am in the world and what I wanted to do."

At first, he thought his path would lead him to sports, but music won out, thanks in part to a guitar teacher who inspired him in college and the luck of where he was born -- halfway between Memphis and Nashville. "Growing up in Jackson, you were hearing out of each ear: rock & roll and R&B to the west in Memphis, and country to the east in Nashville," he says. "But country is the only genre I wanted to be a part of. Being where I'm from, I understand it, and I think most Americans can relate because it is so specific. The most satisfying feeling as a songwriter is when people come up and say, 'I know exactly what you meant in that line.' Country does that like no other genre."

Brandon's commitment to music was cemented, however, when he performed at his first open-mic night -- at a cinder-block roadhouse near the Tennessee River. He sang jukebox staples "Keep Your Hands to Yourself" and "Brown Eyed Girl," and despite an initial crowd of only eight people looking on, he returned every week and discovered he had a knack for commanding an audience's attention, just like his father.

"There are parallels between what I watched my dad do every Sunday morning and being onstage as a country singer," Brandon says. "He was able to tell stories and relate to people, and seeing him connect with people had a lot to do with my songwriting."

Brandon is expert at detailing the small-town existence in his songwriting. He wrote or co-wrote all of the tracks on his debut album, a project he'll unveil somewhere down the road -- for the time-being, he's building an audience by releasing a series of two-song EPs, beginning with the one-two punch of "Speakers, Bleachers and Preachers" and the thumping cruising jam "Let It."

"Songwriting comes from every direction for me. I always have titles and melodies in my phone," he says. One new song, called "Yada Yada Yada," was half-written while Brandon was singing the wordless melody into his phone while traveling. "But," he adds, "I love writing in the studio."

Other than perhaps the basketball court, there's nowhere Brandon feels more at home than in the recording studio. Upon signing a publishing deal with Warner/Chappell in 2013, he absorbed all he could about studio production, and when it came time to cut his own music, teamed up with producer Paul DiGiovanni to co-produce all of his songs, a rare feat for a "new" artist.

"It was important for me to have a thumbprint on my music as an extension of the songwriting process. Working with Paul, we were able to bridge that gap, and it

personalizes the project for me," he says. "We cover a lot of ground in the songs, but I'm somewhere between Eighties country and Nineties rock. I like big guitars and big drums and it has to translate on the stage."

The empowering "Back on the Wagon" contains both, balancing bombast with some plucky strings. The tale of getting over a failed romance, it's a fresh look at heartbreak, with the hurt narrator regaining his confidence through nights out riding around with friends.

"Wilder Horses" marries synth with acoustic guitar to create the most cinematic of Brandon's songs. Written with Ross Copperman and Jon Nite, the track embodies the musical halfway point where Brandon grew up. "The verses are bluesy like Memphis, and the chorus is very Nashville," he says.

And "Break Down on Me," the oldest song on the album, draws directly from his hobby of tinkering with trucks and cars. "In high school I had a '92 F-150 that would always seem to break down on a two-lane road on the way to school, and there was no way getting around it. Everybody would see me. That's what gave me the title," he says of the track, about offering a caring shoulder to a girl. "It's me saying, 'I know things are bad for you now, but I'm good at fixing things. Lay it on me.'"

With his album already finished, Brandon -- who cites Class of '89 alums like Garth Brooks and Alan Jackson as country heroes -- is focusing on taking the songs on the road. He's already opened for artists like Dierks Bentley and Old Dominion, and is playing fairs and festivals around the country, bringing his story of "Speakers, Bleachers and Preachers" to fans who may have grown up the same way.

"I knew coming out of the gate as a new artist that my first single had to say a lot about who I am and where I come from. Hopefully, people will hear it and fill in their own blanks," Brandon says. "That's my goal: for listeners to know that every line I'm singing, I've lived, and for them to find their own story in my songs."