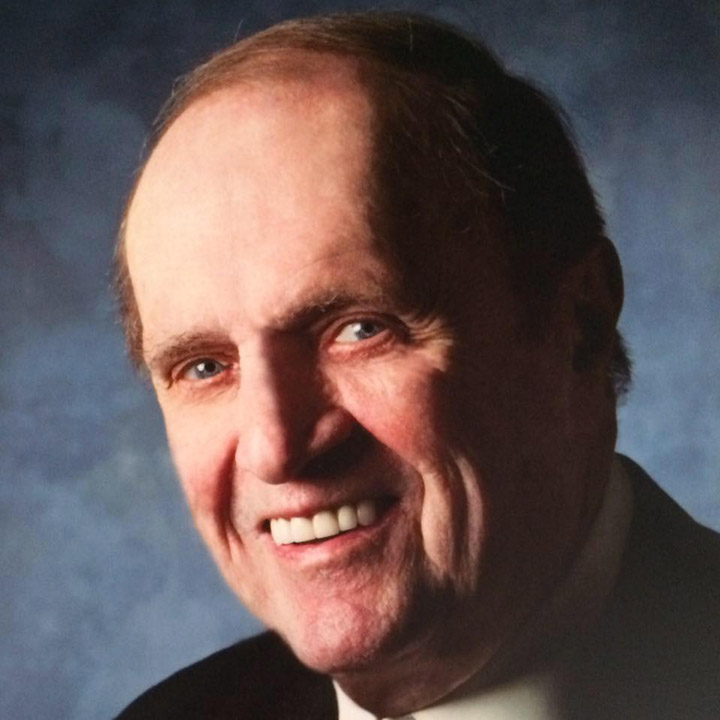 As a stand-up comedian, Bob Newhart explored the absurdities of everyday life with an underplayed delivery and gentle stammer that earned him three Grammys and the first comedy album to reach No. 1 on the Billboard charts. His unique brand of humor translated well to television, where he starred in two of the best-loved sitcoms of the 1970s and 1980s -- the Emmy-nominated "The Bob Newhart Show" (CBS, 1972-78) and "Newhart" (CBS, 1982-1990). While getting along in years, he also experienced something of a career surge in the 1990s with roles in feature film comedy hits like "In and Out" (1997), "Legally Blonde 2" (2003), and "Elf" (2003), as well as an Emmy-nominated dramatic turn on "ER" (NBC, 1994-2009 ) in 2004 -- earning a new generation of fans who had neither seen nor heard of his two beloved sitcoms at the time they were ratings winners.

Born George Robert Newhart in Oak Park, IL on Sept. 5, 1929, Newhart's early life was as mundane as the befuddled businessmen he played in his stand-up routines. He graduated from Loyola University of Chicago in 1952 with a degree in business management, and served stateside in the Army during the Korean War. After his discharge in 1954, he worked as an accountant for United States Gypsum and later as an advertising copywriter for Fred A. Niles, an independent feature and television producer based in Chicago. While at the agency, Newhart began developing a string of comedy routines with a friend, Ed Gallagher that would later serve as the backbone of his stand-up act: elaborate and improvised telephone conversations based on an absurd notion -- a security guard at the Empire State Building attempting to explain the presence of King Kong to his boss, or Abraham Lincoln's press secretary presenting ways for the president to improve his dour image -- which became more delirious with each mounting detail -- the security guard explaining that Kong was on either the 18th or 19th floor, depending on whether the building actually had a 13th floor -- and Newhart's deadpan and slightly hesitant delivery. Newhart recorded many of these bits and sent them to a Chicago DJ, Dan Sorkin -- later Newhart's announcer on his 1961 television series -- who played them during his show. Sorkin also sent this material to George Avakian, famed head of talent development at Warner Bros. Records.

Based on the strength of these recordings, Avakian signed him to a recording contract. Newhart began developing his material into a stand-up act for nightclubs, and the best of these routines (including the Abe Lincoln bit) were featured on his debut comedy album, The Button-Down Mind of Bob Newhart (1960). The album was an immediate hit with listeners, who sent the LP to the top of the album charts -- ahead of even Elvis Presley and the soundtrack to "The Sound of Music" (1961) -- a first for a comedy album in Billboard history. Newhart earned two Grammys for the record, including Album of the Year and Best New Artist, and began making regular appearances with his material on television variety shows like Ed Sullivan's "Toast of the Town" (NBC, 1948-1971).

It was not long before Newhart had his own television program, though he resisted numerous offers to star in a sitcom, citing doubts over his own acting ability. Instead, he opted for a variety program built around his stand-up material. "The Bob Newhart Show" (NBC, 1961-62) earned an Emmy and a Peabody Award, but lasted only a season. Newhart returned to performing in nightclubs and won his third Grammy for his sophomore album, 1961's The Button-Down Mind Strikes Back . He also made regular appearances on TV variety shows -- including 24 appearances on "The Dean Martin Show" (NBC, 1965-1974) and numerous guest host duties on "The Tonight Show Starring Johnny Carson," (NBC, 1962-1987) -- and also branched into occasional acting roles on television, including a 1963 episode of "Alfred Hitchcock Presents" (CBS/NBC, 1955-1965), as a henpecked husband trying to kill his wife. He also made the big leap to film with Don Siegel's WWII drama "Hell is for Heroes," for which he did a telephone routine. Siegel did not want to shoot the scene, and Newhart found the whole experience so unpleasant that he asked producers to have his character killed off. Newhart also found time to marry Virginia Quinn, to whom he was introduced by fellow comic Buddy Hackett. The pair tied the knot in 1963 and eventually bore four children.

Newhart focused on touring and television appearances for most of the 1960s, and released several successful albums between 1962 and 1973. There were also occasional movie roles, including the caper comedy "Hot Millions" (1968), with Newhart as an officious computer expert helping to stop embezzlers Peter Ustinov and Maggie Smith; Vincent Minnelli's film version of "On a Clear Day You Can See Forever" (1970); Mike Nichols' adaptation of "Catch-22" (1970), as Maj. Major; and Norman Lear's "Cold Turkey" (1971), as a tobacco industry executive dispatched to break the will of a small town attempting to quit smoking en masse.

In 1972, Newhart starred as Chicago psychologist Robert Hartley in "The Bob Newhart Show." The series placed Newhart in a familiar position -- the sole voice of reason in a swirling mass of lunacy at home -- which included Suzanne Pleshette, his saucy wife, and Bill Daily, his intrusive airline pilot neighbor -- and at work, where he attempted to maintain order among his patients, including Jack Riley's sharp-tongued Mr. Carlin, as well as John Fiedler and Penny Marshall as members of his therapy group. The show -- filled with a top-notch cast -- was smart, mature, and exceptionally well-written. Newhart earned two Golden Globe nominations for his performance, and the series and Pleshette were both tapped for Emmy nods before Newhart brought the show to a close in 1978 after three seasons in the Top 20. "The Bob Newhart Show" maintained a strong audience following in reruns, and was eventually listed as one of the Top 50 shows of all time by TV Guide and one of the 100 Best by Time magazine -- even providing the inspiration for a popular drinking game among college students. In 2004, a statue of Newhart as Hartley was even erected by the TV Land network in front of the Chicago building that served as the exterior for Hartley's office in the series, but was later moved to the popular Navy Pier.

Newhart returned to stand-up after "The Bob Newhart Show" came to a close; he also logged time as the lead in the TV-movie "Marathon" (1980), as a middle-aged man who runs in the New York City race to impress a younger woman; and Buck Henry's dire political spoof "First Family" (1980), as an inept U.S President. He was somewhat better served as the voice of a jittery mouse tapped to rescue a young girl from kidnappers in the Disney animated feature "The Rescuers" (1977) -- he would repeat the role for the 1990 sequel, "The Rescuers Down Under." He also guest-hosted "Saturday Night Live" (NBC, 1975- ) in 1980 and got his own primetime specials, "Ladies and Gentlemen... Bob Newhart" (part I aired in 1980; part II in 1981), which featured many of his show business friends like Dean Martin and Don Rickles.

Newhart returned to sitcoms in 1982 with "Newhart" (CBS, 1982-1990), which operated on the same principle as his previous show: Newhart as the sober straight man -- this time, as Dick Loudon, a writer of do-it-yourself books who becomes owner of a Vermont inn -- surrounded by eccentrics, including the brilliant Tom Poston as the inn's dense handyman; Julia Duffy as the maid; Peter Scolari as the producer of Dick's cable access program; and William Sanderson, Tony Papenfuss and John Volstad as Larry, Darryl and Darryl, a trio of mangy locals who became the show's breakout stars. The series, which was nominated for six Emmys and five Golden Globes -- including four for Newhart himself -- broke the long-standing tradition of failed sophomore series for stars of former hit shows, and featured one of the most jaw-dropping finales ever featured on TV. Much to the shock of viewers, Loudon is struck on the head by an errant golf ball and awakens -- in bed with Suzanne Pleshette as Emily Hartley, with whom he discusses his strange dream of owning a bed and breakfast in Vermont. The episode -- based on an idea by Newhart's real-life wife -- was later named by both TV Guide and TV Land as the most unexpected moment in television history.

Newhart attempted two subsequent series, "Bob" (CBS, 1992-93), and "George and Leo" (CBS, 1997), both of which failed to attract audiences, despite the presence of Newhart and excellent supporting players like Judd Hirsch and Jason Bateman on "George and Leo" and Lisa Kudrow and Poston on "Bob." Newhart returned to touring with his stand-up act, and in the late 1990s, found a whole new audience with choice supporting roles in feature films like "In and Out" (1996), as the dour head of a high school which gains public attention after its popular teacher (Kevin Kline) is outed on national TV; "Legally Blonde 2: Red, White and Blonde" (2003), as a doorman who aides Reese Witherspoon's aspiring congressional aide; and "Elf (2003), as the adoptive father to Will Ferrell's manic North Pole elf. He also took a rare dramatic turn as a businessman who attempts suicide in the face of impeding blindness in three episodes of "ER" in 2004. For his touching performance, Newhart was nominated for an Emmy. He also played Morty Flickman, the occasional boyfriend of Teri Hatcher's mother (Lesley Anne Warren) on three 2005 episodes of "Desperate Housewives" (ABC, 2004- ).

Newhart found himself on the receiving end of numerous awards in the late 1990s and early 2000s. He was inducted into the Academy of Television Arts and Sciences in 1993, and Billboard placed his debut album at No. 20 on their list of the top records of the last 40 years in 1998. The year 1999 saw his star placed on the Hollywood Walk of Fame, and in 2002, he was given the Mark Twain Award for American Humor. Comedy Central placed him at No. 14 on their list of the "100 Greatest Stand-ups of All Time." Newhart himself continued to perform stand-up, even finding time to pen his memoir, I Shouldn't Even Be Doing This , in 2006. The following year, Newhart contributed to John Landis' documentary, "Mr. Warmth: The Don Rickles Project," about his longtime -- and most unlikely -- friend. In 2004, Newhart established the role of Judson, a librarian who hires a lifetime graduate student (Noah Wyle) to look after a secret collection of rare antiquities in "The Librarian: Quest for the Spear" (TNT, 2004). He reprised the role for both "The Librarian 2: Return to King Solomon's Mines" (TNT, 2006) and "The Librarian: Curse of the Judas Chalice" (TNT, 2008), the latter of which earned Newhart an Emmy Award nomination for Outstanding Supporting Actor in a Miniseries or Movie.