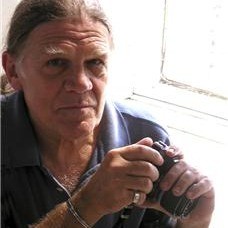 Henry Diltz is an extraordinary rock n roll photographer unlike any other. A founding member of the Modern Folk Quartet, Diltz is as much at home as a musician on tour, as he is a visual historian of the last four decades of popular music. The rapport he’s developed with his musician friends, along with his down-to-earth-grin and frequent laugh, enables him to capture the candid shots that convey a rare feeling of trust and intimacy with his subjects

For Diltz, the pictures began with a $20 second-hand Japanese camera purchased on tour with the Modern Folk Quartet. When MFQ disbanded, he embarked on his photographic career with an album cover for The Lovin’ Spoonful. Despite his lack of formal training, Diltz easily submerged himself in the world of music: the road, the gigs, the humor, the social consciousness, the psychedelia, the up and down times.

For over 40 years, his work has graced hundreds of album covers and has been featured in books, magazines and newspapers. His unique artistic style has produced powerful photographic essays of Woodstock, The Monterey Pop Festival, The Doors, Crosby, Stills, Nash & Young, Jimi Hendrix and scores of other legendary artists. Diltz continues his distinguished career, generating new and vibrant photographs that inspire the rock n’ roll fan in each of us. Henry Diltz is a partner in and is exclusively published and represented by the Morrison Hotel Gallery.

“This is not history, this is evidence!” - Glenn Frey, Eagles

“I’m the drummer, you’re the photographer, it’s as simple as that.” - Ringo Starr

Mick Rock specializes in rock n roll photography and is known as “The Man Who Shot the 70s.” He is the inimitable rock photographer who launched his career with an unknown David Bowie in 1972. From the first photo shoot developed a two-year relationship as Bowie’s official photographer. During this time Rock documented the rise and descent of Ziggy Stardust, and shot promotional films, album jackets, posters, artwork, videos like Life on Mars and Space Oddity and thousands of photographs.

Rock’s career continued to soar with key 70s images like Lou Reed’s Transformer, Iggy Pop’s Raw Power and Queen’s Queen II and many of the Sex Pistols’ infamous shots. In 1977, he moved permanently to New York, where he quickly became involved with the underground music scene pioneered by The Ramones, Talking Heads and Blondie. His pictures, including The Ramones’ End of the Century, captured the revolutionary spirit of this groundbreaking period and made him the one of the most sought-after photographers in the world.

Recently, Mick Rock has worked with stars like Kate Moss, Michael Stipe, Johnny Marr, The Yeah Yeah Yeahs and The Chemical Brothers. He has produced several highly-acclaimed retrospectives of the Glam Rock era, including Blood and Glitter- Glam: An Eyewitness Account and a collaboration with David Bowie, Moonage Daydream; Raw Power: Iggy and the Stooges and Psychedelic Renegades/Syd Barrett. His retrospective at Tokyo’s Metropolitan Museum of Photography in 2003 was hailed as “one of the most exciting exhibitions of pop culture imagery to ever reach these shores”.