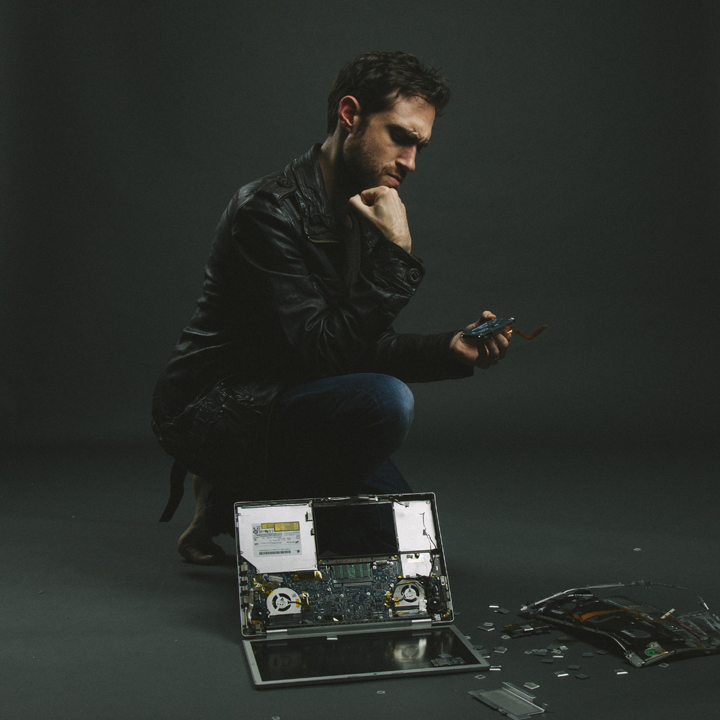 Beatboxer from the future, father of 7, former miss-world.

UK BEATBOX CHAMPION... His rise to success began with him smashing up the standard for beatboxing, becoming the heavyweight UK champion, ticking the WIN box twice for title of UK Beatbox Champion back to back in 2006/07. In 2008 he became a judge as not enough beatboxers were prepared to compete with him.

LIVE MUSIC PRODUCTION... But Beatboxing has its musical limits so Beardyman went a step further, using looping technology to enable him to improvise live on stage to create tracks that that may take weeks in the studio, using the very vanguard of Live Music Production to build sonic soundscapes; a pistol duel at dawn with the capabilities of top DJs with pre-recorded music, but 100% live with nothing pre-recorded or even rehearsed. Like some sort of musical Victor Frankenstein, on stage he works the sonic vernacular into mind-expanding creations and mash-ups using the sole instrument of his voice. His diversity and ability to musically evolve makes his skills truly exciting, probably the reason guru Rob Da Bank calls him "literally the most entertaining live human being I've seen in donkey's years." Over the last few years he has been developing his own software to unleash his many capabilities bigger and better than ever. It now exists and is known as the BEARDYTRON_5000mkII, the world's most advanced live music production and looping software, enabling the improvisation based Beardyman to take his creativity ever further and produce in real time what's in his head. He unveiled the BEARDYTRON at TED in LA in 2013 to a standing ovation that led to him recording with Herbie Hancock and many other projects now in progress.

YOU TUBE SUPERSTAR... Beardyman is widely known for being a YouTube "Star," famed for his comedic and jaw-dropping virals beginning with Kitchen Diaries which has garnered well over 5 MILLION views across the numerous postings and has even been featured on Ellen Degeneres' show in the States. In the truest sense of the word viral, the talents of Beardyman have pervaded every last corner of the globe, gaining over 50 million views of his performances, surfing into homes on the most prolific medium of the 21st century. In November 2008 Beardyman was beamed LIVE into your computer as a main headliner on the first ever streamed concert, YouTube Live, becoming a supernova of the world wide web and personal hero of the entire Google empire (owners of the earth). There is even a Beardyman heritage plaque in their toilets... In 2013 Beardyman was the only non-US artist to be featured as part of You Tube's Comedy Week and globally streamed and TV advertised event alongside Seth Rogan, Sarah Silverman and Skrillex.

FESTIVAL HEADLINER... On stage Beardyman has been playfully twisting the brains of ravers the world over with his unique brand of beatboxing-technological-mash-ups, leading them on sonic adventures with their addled minds. He's graced the famed main stages of Lovebox, Rise, Sonar by Day, Sonar by Night, Bestival, Snowbombing, Beachbreak Live, BBF Japan, Ultra, Global Gathering and many, many more, giving incredible performances that embraced the musical variety of the festival scene. In 2010 he opened Glastonbury Festival's 40th Anniversary and again in 2011 and was credited by BBC Breakfast as "King of Sound, Ruler of Beats" and a major highlight of Reading festival. In 2013 BBC Breakfast credited him as "Ninth Level Sound Wizard" His eye for talent has led him to join forces with artists of fearsome caliber, such as Fatboy Slim, Imogen Heap, Reggie Watts, Groove Armada, Chase and Status and more, proving his dexterity as an artist. In November 2009 he made world history by performing and improvised show with a full sized orchestra in his collaboration with The Heritage Orchestra; Beardyman used the sections of the orchestra as he would use his loopstation building full-scale improvised tunage from Dubstep to Disco. In 2013 Beardyman's profile kept soaring, headlining several festivals main stages and rocking massive crowds around the world. His festival appearances in the USA, Japan, Australia and throughout Europe have spread his wings globally and led him to be featured as music and comedy guests on shows such as Conan O'Brien.

TOURING ARTIST... In May 2010 Beardyman completed his first ever tour of UK & Ireland, successfully selling out ALL venues, including the O2 Isilngton Academy in London. This is an impressive and unusual feat for an act yet to release any material. In autumn 2010 he sold out another tour, and again in 2011, selling out the Brixton Electric in December last year. The next major tour in the UK and USA in 2013 took things to new heights with the BEARDYTRON_BETA-TOUR and the review headline, "Britain's Got No Talent, Beardyman Has It All!"

RECORDING ARTIST... In 2011 Beardyman released his debut album to critical acclaim on Sunday Best Records. With producer Tom Middleton (famed for his work with other musical scientists Aphex Twin and Matthew Herbert), they encapsulated the many sides and essence of Beardyman on one record: fusing funny skits with credible music, all using his golden larynx to beatbox 95% of the instrumentation. The press and artist praise for this groundbreaking album has led to a series of exciting collaborations in development. He is now recording his second album with the BEARDYTRON_5000mkII production system and Alexis Petridis (one of the UK's most respected music critics) recently had Beardyman as the lead feature of the Guardian Podcast where he described him as "the (or a) future of music" and includes a live performance of one of the songs he's currently recording: http://snd.sc/116idZG In 2013 his collaboration with Fatboy Slim "Eat Sleep Rave Repeat" beat One Direction in the UK charts and has become a global underground phenomena that is now charting globally.

COMEDIC TIMING... Central to all Beardyman performances is a playful sense of humour. Well aware that his incredible career is based on his ability to "tune a raspberry," Beardyman is able to make fun of himself and the audience with a natural and improvised comedic ability, leading to standing ovations at sell-out shows at the Edinburgh Fringe festival 2009, both with his own shows in the Udderbelly, Underbelly and at the Time Out comedy revue 'For One Night Only,' as well as the Udderbelly on London's South Bank proving an ability to cross over genres. In July 2010 Beardyman debuted at Montreal Comedy Festival: 'Just For Laughs' on the Britcom showcase alongside Brit giants Jimmy Carr and Phil Nichol, hosting the Amp'd music show (headliner Tim Minchin ) and also performing on one of the JFL televised Gala shows. He repeated this in 2011, sold out shows at the Assembly Hall in Edinburgh, featured as Tim Minchin's special guest at the BBC Comedy Proms, collaborated numerous times with dear friend Reggie Watts and in summer 2012 co-hosted with Vimeo Awards in NYC with Reggie. He was also second on the bill of the Music Comedy stage at Sasquatch festival, performs on Sky Atlantic's new Set List series filmed earlier this year in LA and has just signed a DVD deal with 2 Entertain. A fresh and improvised TV show is in development with You Tube and Beardyman's unique comedic talent is stepping up to the plate. Prince Harry attended a comedy show recently along with other royalty who expressed their deep passion for his comedic talent and that being the only reason they were there... Beardyman's voice acting has led to him working with Mike Judge amongst as lead role for several pilots in development and him re-recording the first episode in the new Beavis and Butthead series. He was one of the highlights of Jack Black's Festival Supreme 2013 in Santa Monica and much more. Beardyman's new comedy show is called One Album Per Hour, where the audience makes up the track titles and Beardyman makes the album, live and unrehearsed. OAPH sold out a week long run in Edinburgh 2013 and received only 4 and 5 star reviews.