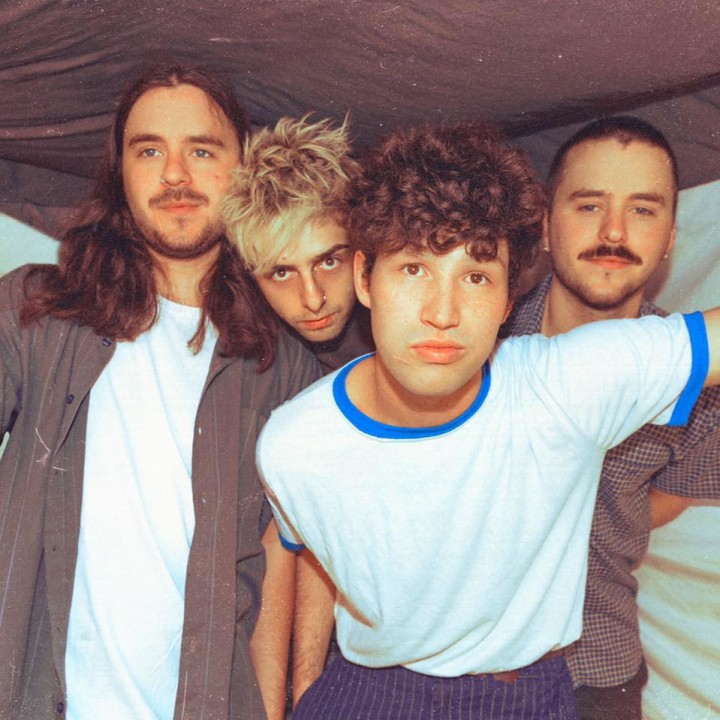 "Honestly we are in the best position we've ever been in. We are sitting on a shit hot album, we sold our souls to a record label who like us, we've just got new management who has a "guy/gal for everything and we are awesome live. "

Bakers Eddy are, in their own words "edging." That is, the Moonee Ponds (or more precisely Travencore) via Wellington quartet featuring twin brothers Ian and Alex Spagnolo, and lifelong friends Ciarann Babbington and Jamie Gordon consider themselves on the cusp of finally realising their shared musical ambition, and rightly so.

After early years earning stripes as a young band slogging it out with older peers on the tour circuit back in NZ, a permanent move to Melbourne's fertile band scene in 2017 has seen everything fall into place. Ian explains, "Most of the bands we listened to and aligned ourselves with were over here, and we noticed there was a scene that we could fit perfectly into."

Following a string of tumbling, punk-inspired, power pop gems which gained notice on the nation's airwaves, the band, with new management and publishers on board, have just finished recording their debut LP for Ivy League Records. The forthcoming long-player will be an assembly of keen- edged, guitar pop, of the kind that demands radio attention

It seems that finding kindred bands in their new home across the ditch who were the same age and into the very same whip smart, punk rock inspired riffs that they were, was a revelation. This liberated the band and helped them understand they could embrace their authenticity. Ciarann offers, "There's no comparison between us now and us back in NZ, we are completely different mentally, directionally, sonically, stylistically and it's fucking dope."

In the back of a quiet share house, in a leafy inner suburban street, the band gather to discuss where they have been and where they are going. Their easy common bond forged at school, on stages, in greenrooms and out on the road is evident in the relaxed conversation. The story of their big move over looms large on the discussion. Ciarann explains, "Tom Larkin from Shihad was actually the person who recommended we make the jump after seeing us perform at a showcase, and being fans of Shihad growing up it was a no brainer."

Making the move the band again hooked up with Larkin for some guidance and "tough love" which saw him request the band write 50 songs in 5 weeks. "Working in that capacity helped us grow as songwriters, got us thinking in a different way," Ciarann continues. "Plus we were writing fun songs, or at least songs we were having fun with. That period as a whole was a big part of the re-defining process."

Speaking with the band you may be forgiven for mistaking their laid back demeanour and skate slacker aesthetic represents a lack of aspiration, but listen to what they have to say about their collective future and you find four young friends who are intensely ambitious, determined to make the band which has now been a part of their lives for a decade, a success. Jamie explains that Bakers Eddy are, "super- driven, but we also don't take ourselves too seriously which I think sometimes makes people think we are a bunch of slackers. We work hard for this band, to the point where it takes up most of our lives, at the same time, its music, so we're gonna have fun with it!"

The bond between the brothers and best friends means that although there is the odd flare up associated with living with each other 24 hours a day. "We can be brutally honest with each other," Ian shares. "We're not going to pussyfoot around if something needs to change to better the song, at the same time we love each other like brothers so it's never personal. Mostly. Sometimes it's fun to have a dig. We know each other's strengths and weaknesses and we know where each other is going to go. So the chem is defs there."

When it comes to measuring their quality of output Alex explains that the band look back homewards to local punk legends The Mint Chicks as a creative tide mark to aspire to. "Ever since Ciarann first saw The Mint Chicks perform a shambolic set at a young age, he was well and truly hooked on their aesthetic and hectic punk song arrangements -- this sifted down and well and-truly infected all of us in Bakers Eddy, defining them as a huge inspiration to our sound and manner of delivering a live show. To this day we reference The Mint Chicks in one way or another in most of what we do."

The next twelve months is shaping up to be the biggest of the band's decade together, but according to the band their own goals will still be measured against their roots as an act that thrives and survives on the reputation of their live shows. "In a year we want to be able to say that was a sick sold out tour," Ian concludes. "It's going to be the first time ever that we're going to be doing songs that nobody has heard before, or even releasing songs that nobody has seen live before. So when we release it going to be brand new to everybody, and that's fucking exciting!"