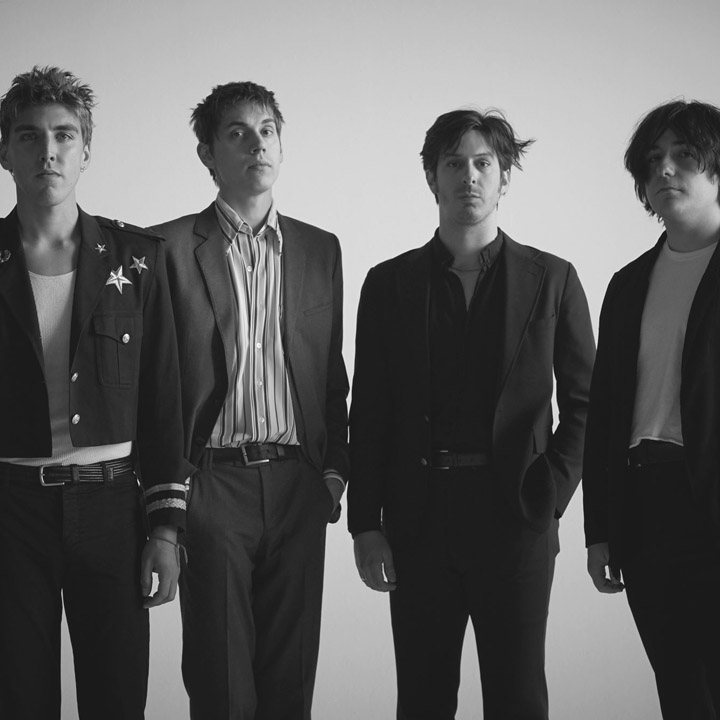 The third full-length from L.A. band Bad Suns, Mystic Truth gets its title from a piece of art that vocalist Christo Bowman stumbled upon while visiting London’s Tate Modern on tour. Created by Bruce Nauman in 1967, the neon-and-glass piece spells out a possibly paradoxical statement in blue spiraled cursive: “The True Artist Helps the World by Revealing Mystic Truths.”

“I thought that connected back to the message of the record, which is about finding the extraordinary in very simple things, even though we’re living in a very dark time right now,” says Bowman, whose bandmates include guitarist Ray Libby, bassist Gavin Bennett, and drummer Miles Morris. “Instead of succumbing to that darkness, I think you’ve got to try to hold onto some optimism and try to uncover those simple miracles so you don’t lose the plot of what’s really important.”

Produced by Dave Sardy (The Head and the Heart, The Black Angels, Oasis), Mystic Truth channels that searching quality into songs with a powerful sense of purpose. In creating the album, Bad Suns recorded at the legendary Sunset Sound and at Sardy’s home studio, building on the melodic brilliance first glimpsed on their debut album Language & Perspective -- a 2014 release that hit #24 on the Billboard 200 and led to massive tours supporting Halsey and The Neighbourhood. At the same time, the band amps up the intensity of their 2016 sophomore effort Disappear Here (praised as their “most dynamic and introspective work yet” by Alternative Press), giving way to a more emotionally urgent merging of rock & roll, post-punk, and pop.

Right from the album-opening “Away We Go,” Bad Suns reveal the timeless sensibilities at the heart of Mystic Truth. With its soaring vocals, majestic piano melodies, and fiery guitar tones, the song unfolds as a brightly anthemic battle cry. “‘Away We Go’ was mostly inspired by us growing up and really being adults for the first time, and trying to make sense of all that,” says Bowman, who co-founded Bad Suns at age 17. “It’s about learning how to make decisions for yourself, and sometimes just going for something and blindly trusting that it’s going to work out.”

While Mystic Truth bears a certain classic simplicity, Bad Suns also infuse the album with its share of sonically surprising moments: the ethereal pop of “A Miracle, A Mile Away,” the melancholy waltz of “Darkness Arrives (And Departs),” the shapeshifting piano balladry of “Starjumper.” Woven with Bowman’s sharply reflective lyrics and finely detailed storytelling, the album also delivers a number of love songs, from the punchy pre-breakup track “The World and I” to the starry-eyed “Love By Mistake” to the starkly tender “Separate Seas.” (“I’ve been in a long-distance relationship since my girlfriend moved to Miami -- she works for an airline so she’s always flying,” says Bowman of “Separate Seas.” “That song’s about those nights of staying up and staying on speaker phone with one another till really late, even when there’s nothing to say.”) And on “Hold Your Fire,” Bad Suns offer up a solemn yet cinematic meditation on acceptance. “It’s about a relationship that’s not working out, and it represents that moment when you decide to just accept that it’s over instead of trying to fight,” Bowman says.

One of the most epic tracks on Mystic Truth, “One Magic Moment” captures a restless determination with its thunderclap rhythms, sprawling guitar lines, and shimmering piano work. As Bowman explains, the song’s title partly speaks to its enchanted origins. “We’d been jamming all day and nothing was happening, and all of a sudden there was this shift in the air,” he says. “Gavin had started playing this chord progression, and the song just came together when we were least expecting it, like magic.”

For Bad Suns, chasing that magic has always formed the essence of the band. With Bowman and Bennett first meeting in seventh grade, the two near-lifelong musicians eventually linked up with Libby and Morris and spent their teenage years working their way through the L.A. music scene. After dropping a demo off in the mailbox at alt-rock radio station KROQ, Bad Suns saw their breakthrough single “Cardiac Arrest” played on the famed Locals Only radio show, and quickly landed a deal with Vagrant Records. The band then made their debut with the 2014 EP Transpose, and soon widened their following by hitting the road with bands like The 1975.

Newly signed to Epitaph Records, Bad Suns found the making of Mystic Truth to be especially charmed. “Recording this album was like a never-ending dream -- there were times when it felt like we were pulling songs out of the air,” he says. One of the most memorable moments for the band took place on a writing trip in Palm Springs, during which they stayed in a mid-century dome house overlooking the nearby wind farm. “We were playing late at night and looking out at all the stars and the windmills, and ‘Hold Your Fire’ just came out of nowhere, which felt really special,” Bowman recalls.

Over the years, Bad Suns have invited those bursts of inspiration by endlessly opening themselves up to new ideas, often by immersing themselves in art or literature -- “Starjumper,” for instance, references a passage from Russian novelist Mikhail Bulgakov’s The Master and Margarita. That approach undeniably shaped the emotional undercurrent of Mystic Truth, an album both intimate and universal in scope. “I always want people to be able to insert their own lives into the songs that we create,” Bowman points out. “When you’re able to unite people through music, even if we’re all coming from totally different circumstances and different places in life -- to me that’s one of the most intense levels of connection you can possibly have.”