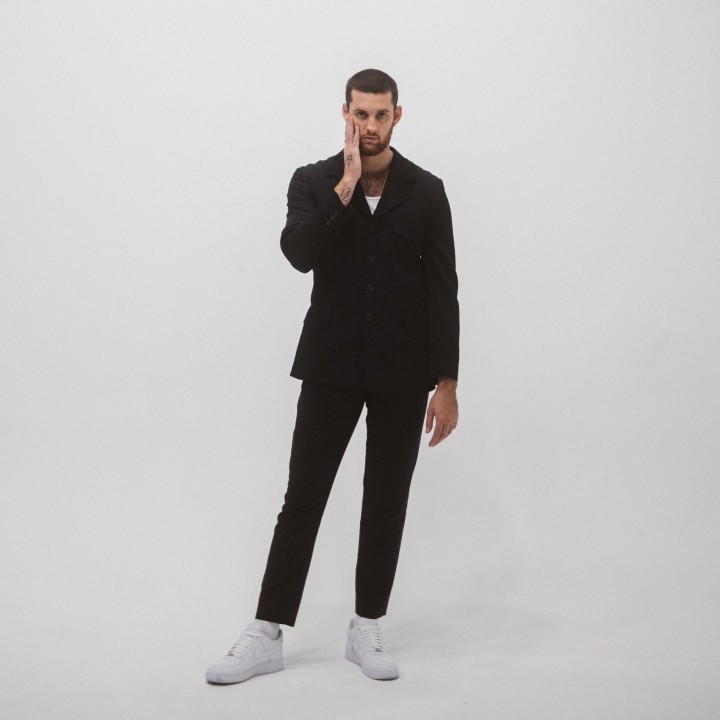 The best ideas often start out as jokes. If you're 6 ft. 6 in. tall & rock a burly beard,calling yourself "Baby Jake" might be the most ironically badass thing you could possibly ever do...

"I look like a grown man."laughs the pop, singer, songwriter, and self-proclaimed "rock star"born Jake Herring. "If I walk into a building, you're going to notice me.But at the end of the day, I'm still a kid at heart, andI don't ever want to lose this feeling. That's what my music is all about."

The Fort Myers, Fl native initially made a mark in music under his legal name. In 2016, the title track of his independent debut, the Little MessEP, racked up over 1.3 million streams and illuminated the dynamic nature of his voice. During 2018, he linked up with super producer DVLP [Eminem, Lil Wayne] who signed him to Transcend.ent. Together, they dove into penning countless songs and fashioning a signature sound.

In the aftermath, he attracted the attention of SB Projects and landed a deal with School Boy Records and Republic Records. Nodding to formative influences ranging from Tom Petty, Queen, and Crosby, Stills, & Nash to Lil Wayne, 50 Cent, andRaekwon, he aimed to merge "the seventies Rockstar with a modern rhythmic sound."

If anybody can accomplish such an ambitious mission, it's him.

The larger-than-life presence he projects carries through the songs comprising his major label debut, DAYCARE. Backed by organic instrumentation a la piano, guitar, horn sections, and more, he's as classic as he is current. Case in point is the first single "Cigarettes On Patios." Produced by DVLP & Shayon Daniels, a ragtime piano melody swings into finger-snapped nostalgic verses as Baby Jake recalls, "I was smoking cigarettes on patios. I was drinking beer with my friends. I was trying to boogie down tonight, vodka with the Sprite, here we go again!"

"It's reminiscent of high school days," he admits. "I had the greatest teen experience ever. I crashed most of the parties in town with a couple of my friends. The whole track is about going from party to party. Back then, everybody was smoking & drinking all the time. As soon as I thought of the visual, I just ran with it. This is the perfect introduction to me."

Elsewhere on "Fun," snappy guitar underscores an interpolation of Skee-Lo's "I Wish" as he croons, "I wish I was a little bit taller, I wish I was a baller, wait...I am!"

It speaks directly to his overarching message on DAYCARE.

"Stay a kid." he leaves off. "The moment you stop, you're just going to get bored with your life and be crushed by all of the responsibilites. Adulthood really ain't all that. This is why the majority of my tracks are mainly about turning up and having a great time. You only live life for so long. So, be a kid, live it up, and stay happy... Oh yeah, and if you want to try to take me on the basketball court, I'm always down," he grins.