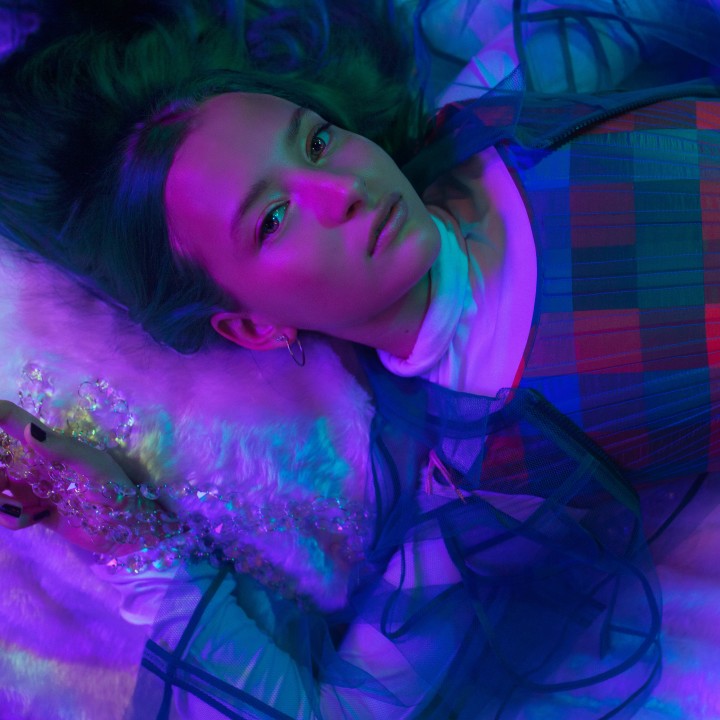 “It doesn't matter how old I am,” Au/Ra explains. “If the music's good or not: that's what matters.” She should know – for the last two years, Au/Ra has crafted a unique and powerfully emotive sonic world filled with A-class pop songs that explore the dark nature of humanity with huge pop hooks and distinctive production.

Au/Ra grew up on the Caribbean island Antigua. She describes it as a beautiful place but one that comes with complications. “You’re not shielded from things on the island,” she explains, noting that things like bullying, violence and animal cruelty are all things she witnessed as a young person. “That stuff is just around you all the time, but it's also such a beautiful place with the most friendly people. It's a different kind of situation and it’s really influenced my artistry.”

Her father is a techno DJ and producer (“He fit right in in Ibiza,” she laughs), while her mother “is more like a jazz chill out artist”. When she told her dad she wanted to be a popstar, he was opposed to the idea. “Because he knows so much about that world, he was like, ‘No, no, no, no. None of that.’ That life is too hard; too difficult.”

“I kind of grew up watching my parents make music every day,” she recalls. “They could start with nothing at the beginning of the day and by the end they’d have a song. I guess it seems really natural to go into that.” However, having been working at her music career since she was 12, Au/Ra now understands where her father was coming from: “You have to sacrifice so much to be able to do this, which I now have realised.”

Being in recording sessions when you’re any age must be a daunting prospect, but even as a 12-year-old, Au/Ra loved every moment of it. “The thing is, none of those songs are ever going to be released,” she admits, “but they definitely lead me to find out what it was that I really wanted to say and the sound I wanted to create.”

It's a sound that in the space of a few years has garnered Au/Ra a legion of fans. While definitely pop, her music is the aural equivalent of an Edgar Allen Poe story; a patchwork of subterraneous synths, haunted vocals, propulsive beats and lyrics that tackle the underbelly of life. On the breakout hit “Panic Room” (which went on to be remixed by underground duo Camelphat and now sits at 40 million streams), Au/Ra delves into her experiences with anxiety, while undulating bass and sparse electronics whoosh like a whir of intrusive thoughts. Likewise, recent single “Assassin” plays out an internal struggle with an inner saboteur, background synths and vocals swirling around like echoes in an arena ready for battle.

It’s the sort of narrative that peppers the singer’s music and visuals. In fact, storytelling is inherent in everything she does artistically. Her name, for example, is taken from a character she wrote in a Lord of the Rings fan fiction when she was 12. In that story, the main character died. “It was dark,” she says with a laugh. “But I think writing that story really was my escape at the time. I still write short stories now.”

She sees her songs as an extension of this. From concept to full realization, every track and video has a distinctive plot. Not that this narrative drive ever puts her music out of reach. Inherent to everything Au/Ra does creatively is a need to use art to make sense of the world around her, and she’s aware that her fans are all experiencing similar things. From mental health issues, existentialism or her generation’s complex relationship with social media, her music is the embodiment to Gen Z’s hopes and fears.

“I'm a huge over-thinker and I question life a lot,” she explains. “In my music, I’m questioning different social and personal issues. I mean, I love writing songs about love and about crushes…but I think it's also so essential to talk about things that people can actually like really relate to in a different way because in the end, there's so many songs about that out there already. Of course I'm going to have to write that for myself. But I’m not always thinking about what I need. My music is also about what other people maybe need to hear; that's really important to me.”