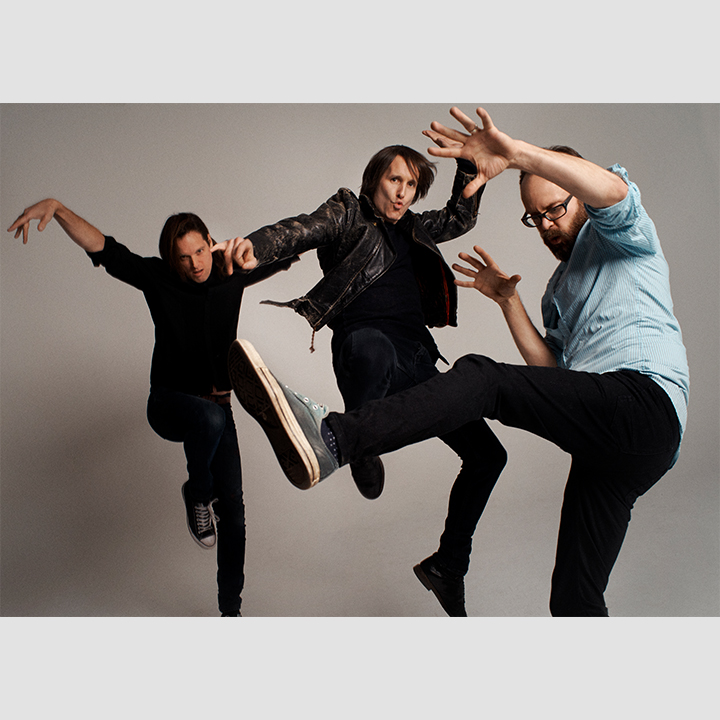 Islands is the new album by Northern Irish rock group Ash. The trio’s seventh studio collection, due for a May 18 release on Infectious Music, it’s an open-hearted set of songs dealing with love and loss, friendship and betrayal, identity, salvation, redemption and rebirth… all the important stuff. Pound-for-pound, it’s also the strongest, most exhilarating long player of Ash’s storied 26-year career, an album which reaffirms the trio’s status as one of the most idiosyncratic and singularly thrilling guitar bands on these islands.

The title of the band’s new album alludes to the unique environments in which its constituent songs were birthed. In the spring of 2016, following a whirlwind Japanese tour to close out the touring cycle for 2015’s Kablammo! album, Ash frontman Tim Wheeler undertook a visit to the picturesque island of Naoshima, renowned worldwide for its modern art installations, architecture and sculptures. Wheeler found the island’s tranquil, meditative atmosphere conducive to both reflection and creativity, and as he immersed himself in his craft, new song ideas began to ferment and flow.

Back in Manhattan, the singer/guitarist’s home for the past 12 years, these fecund sessions continued. Wheeler embarked upon disciplined, hothouse song-writing exercises, challenging himself to write a song every hour across intense, focussed ten hour periods. In the wake of a difficult, traumatic break-up, further field trips were taken to Deià, Mallorca – the former home of poet and author Robert Graves – to Santorini, Greece and to Lambay Island, off the coast of North Dublin, each journey colouring Wheeler’s song-writing in new and distinct ways as he sought to document, address and resolve the emotional fall-out of his broken relationship in his art. The results, arranged and perfected with bassist Mark Hamilton and drummer Rick McMurray at the band’s own studio in New York, emerged as some of the most powerful, personal, heart-felt and affecting songs of Ash’s career.

The group’s debut single, Jack Names The Planets was funded and released by London-based radio plugger Stephen Taverner on his own La La Land label in 1994, picking up airplay and plaudits from influential Radio 1 DJs John Peel, Steve Lamacq and Mark Radcliffe. That same year, Korda Marshall, the former Head of A&R for RCA Records, snapped up the teenage rockers as one of the first signings to his newly created Infectious Records label. The group’s first two Infectious singles, Petrol and Uncle Pat, topped the UK indie charts: the third, the irresistible Kung Fu, equally indebted to martial arts legend Jackie Chan and punk pioneers Ramones, marked the trio out one of the nation’s most exciting new bands. 1995 saw Ash crack the UK Top 20 for the first time, with pop-punk classics Girl From Mars and Angel Interceptor, before the Top 10 success of Goldfinger prefigured their debut album, 1977, crashing into the UK album chart at number one.

The years that followed were something of a blur. The band closed Glastonbury festival in 1997, recruited London-born guitarist Charlotte Hatherley that same summer, headlined Reading festival as a quartet in 2001, and racked up a second number one album (Free All Angels), a Top 10 album (Nu-Clear Sounds) and six more Top 30 singles in between. Free All Angel’s lead-off single, Shining Light, earned Tim Wheeler an Ivor Novello Award for Best Contemporary Song while the incendiary Burn Baby Burn garnered a Single Of The Year accolade from Q magazine. In 2004, the band’s fourth album, Meltdown, showcased a heavier sonic approach, debuting at number 5 in the charts, and securing the band an opening slot on U2’s world tour. Upon completion of the album cycle, Wheeler and Hamilton relocated to New York, while Hatherley exited the group by mutual consent.

Further changes were afoot. Following the release of 2007’s Twilight Of The Innocents, the band declared they would no longer make albums, but acknowledge the new digital download landscape by releasing only singles. The bold, innovative and ground-breaking A-Z Series - 26 singles in one year, a single for each letter of the alphabet, one release each fortnight on the trio’s own Atomic Heart Records label - was launched as a subscription service in 2009, drawing acclaim from fans and the industry alike.

Following such a flurry of activity, it was entirely understandable that Ash would scale back their operations as their 20th anniversary approached. Hamilton and McMurray became fathers twice over, while Wheeler released a Christmas album, This Is Christmas, in collaboration with Emma-Lee Moss aka Emmy The Great. In 2014, the singer released his first solo album, the poignant, achingly beautiful Lost Domain, which chronicled the loss of his father George to dementia. The following year saw the first Ash album since 2007, the confident, critically-acclaimed Kablammo! No-one could have foreseen that its release would be followed by one of the toughest years of Tim Wheeler’s life…

Islands is a cathartic collection for the singer, inspired, says Wheeler, “by me trying to get my head around a break-up that didn’t make any sense to me.” Self-produced, and recorded at the band’s own Atomic Heart Studio, where every Ash release since Twilight Of The Innocents has been committed to tape, the album cycles through the full Kübler-Ross grief model - denial, anger, bargaining, depression and acceptance – with Wheeler laying bare his emotions in unflinching detail.

And yet, Islands emerges as one of the most uplifting, empowering and vital releases in Ash’s rich catalogue. Preceded by the 2 minute 31 second fuzz-bomb single Buzzkill, which Wheeler cheerfully describes as “simple, dumb, punky and full of unnecessary swearing”, the 12 song set is eclectic and compelling, the sound of a band emphatically focused on the bright possibilities of tomorrow.

“We played 20th anniversary shows for 1977 in 2016 and those were magical nights, great reminders of where we came from,” says Wheeler. “But with that nostalgia trip out of the way, it was time for the great leap forward.”

Moving beyond the riotous Buzzkill, which features the band’s longtime friends and fellow countrymen Damian O’Neill and Mickey Bradley from The Undertones on backing vocals, Islands is unmistakably the sound of a band at the peak of their powers. The brilliant Annabel sounds like a classic Ash single, with soaring guitars and a delicious, warm, widescreen chorus (“In the storm, I will draw you close”) while the effervescent, synths-led Confessions In The Pool, written about a therapeutic weekend in Miami, is a celebration of friendship in the darkest of hours.

Wheeler’s heartache and dislocation is evident in the sobering All That I Have Left with its piquant post-break-up eye for detail (“junk letters in your name…your lingering ghost, a haunting sense of shame”) and the lush, orchestral-pop of Don’t Need Your Love (“Couldn’t see the signs or read between the lines, now I’m so confused…”) but there’s determination too to move on, in the deceptively simple Somersault, which harkens back to the sound of Trailer, even as Wheeler sings of a desire to forge “straight ahead, no reminiscing”, and in the dazzling Silver Suit, a song simultaneously celebrating self-transformation and a paean to New York’s inspirational, liberating energy.

Wheeler’s new-found sense of freedom is perhaps most evident in the sensuous, driving Did Your Love Burn Out? which opens up like a Leadbelly lament (“Was this not your world, my love?”) then blossoms unexpectedly into strutting Black Keys/White Stripes-style funk-blues. Similarly, while the closing Incoming Waves starts out as the album’s most contemplative, low-key song - “Watch the sun reflecting on the incoming waves… All I’ve got is time to think about the moment it went wrong” – its classy, under-stated pathos builds into a powerful, hypnotic, lushly-layered climax, the hallmark of a master songwriter at his most assured.

“We wanted to make a classic album,” Wheeler says simply. “For the first time, we knew that every song we were starting was going to end up on the record: we’ve never had so much confidence in the material from the outset.”

It was this confidence, and the sheer excellence of the songwriting and performances, which compelled Ash’s old mentor Korda Marshall to re-sign the band for the release of Islands: in another neat piece of symmetry, Stephen Taverner also returned to direct the band’s business dealings once again, a fact which all three band members hail as significant.

“We’re excited to be back with the same infrastructure,” says Mark Hamilton. “Over the past decade we purposefully took a step back to focus on family life, but taking some time away really makes you appreciate the life we have and makes you more resilient as a band. When we started out we were kinda the laughing stock band of Downpatrick, and that gave us a real drive to prove people wrong: that drive was what inspired our initial success. With Islands, that drive is back again. The industry has changed so much since we started, but now this is about extending our legacy into the next decade.”

“We’ve had two number one albums and 18 Top 40 singles,” reflects Wheeler, “so when we were making this record, part of the thinking was, is this song strong enough to knock one of the big hits out of our live set? With Islands, I think we’ve given ourselves a nice problem, because these are some of the best songs we’ve ever written. We’re excited to be back…”

t’s both a raw and open-

t’s both a raw and open-