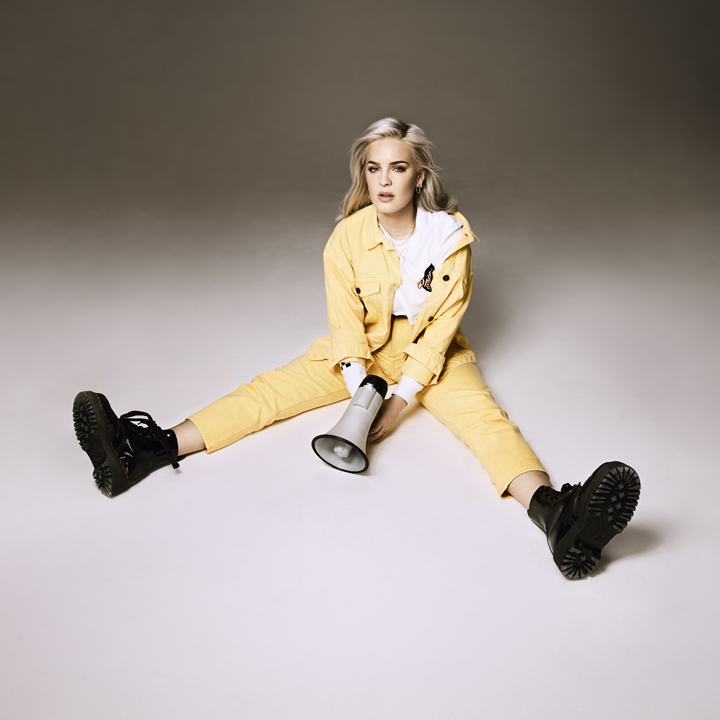 Anne-Marie doesn't do anything by halves. Ever since she was two years old and joined her local performing arts school in Essex, she's wanted to excel at whatever she puts her mind to. Childhood roles in West End productions of 'Les Misérables' and 'Whistle Down the Wind' proved she had a gift for singing and acting. She started doing karate in her teens, and won three international championships by the age of 17. But music has always been her passion and after touring the world with Rudimental and cementing her place in pop history with 'Rockabye' - the Clean Bandit which became the longest-running UK No.1 in 22 years - she's ready to excel yet again and her debut album, 'Speak Your Mind', sounds like one of 2018's defining pop records.

Anne-Marie has been writing the album for five years, and whittled down the finished article from nearly 1,000 songs.  Getting the track-list spot-on was incredibly important to her. "I've always wanted to have an album that makes sense from start to finish, rather than an album that's just a load of random hits put together," she explains. "I want people to know about me from every angle. I want people who listen to this album to be able to figure out who I am as a person, not just as a singer."

The result is a deeply personal collection that captures Anne-Marie's super-warm and straight-talking personality. Her break-up bangers 'Alarm' and 'Ciao Adios' (both UK platinum singles) are obviously present, joined by the infectious single ‘Heavy’, but they rub shoulders with other modern pop gems which show different sides to the 26-year-old. "I didn't want people to think I'm just about being hateful to ex-boyfriends!" Anne-Marie says with a knowing laugh, referring to the spunky subject matter of ‘Alarm’ and ‘Ciao Adios’.

We're already seeing her more playful side on 'FRIENDS' – a collaboration with DJ/producer Marshmello that just cracked the UK top five. "You're not my lover, more like a brother, I known you since we were like ten, yeah," Anne-Marie sings sassily, placing a guy firmly in the friend-zone. The flirty tropical pop tune 'Can I Get Your Number' ("something I'd never ask in real life!") and tongue-in-cheek strut of 'Bad Girlfriend' also show off her sense of fun.

But other songs on the album are more sombre and contemplative. Slow-burning opening track ‘Cry’ finds Anne-Marie channelling Alanis Morissette, one of her teenage heroes. 'Trigger' is a heartfelt plea for society to stop relying on guns to sort out its disagreements. And ’Perfect' sees Anne-Marie lay bare her imperfections to help others embrace theirs. "I always wanted to write a positive song for women, but one that doesn't sound cheesy," she explains. "I want someone else to listen to this song and think, 'Yes! I'm not the only one who sometimes doesn't want to put makeup on in the morning."

Elsewhere, the raw and revealing 'Machine' finds Anne-Marie grappling with the fact she's an empath, someone who can't help being affected by the emotional state of others. "I can walk into a room full of happy people and feel really happy. But if I walk into the next room and someone looks sad, I can go into a really depressive state," she explains. "It can be really draining, so I wrote this song because sometimes I wish I wasn't like that. Sometimes I wish I was a machine."

But it's hard to imagine Anne Marie writing the devastating electro ballad 'Then', inspired by a friend's split from their long-term partner, without this gift for empathy. Equally, it's hard to imagine someone who lacks Anne-Marie’s deep love for pop music coming up with the nostalgic bop '2002'. Anne-Marie actually co-wrote '2002' with Ed Sheeran, the artist she's about to go on tour with.  "Ed is amazing," she says excitedly when Sheeran's name is mentioned. "He can just write these melodies that connect with everyone on such a fundamental level. But to be honest, I always try to work with people who are my friends and I can speak openly to. I just tell them what's happening in my life and they say, 'Yeah, let's write about that.' And it ain't ever scary because I just think the best songs come from stuff that's real. To be honest, I can't write about something that isn't real."

Anne-Marie says writing songs gives her the same kind of emotional release as karate, "only this way it's a bit less aggressive!" She finds herself writing music nearly every day, whether she has a studio session booked or not. "I'm still a very emotional person, but if I didn't get to write songs, I can't imagine what I'd be like!”

Cool, contemporary, and crafted with some of pop's most exciting songwriters and producers (including Steve Mac, MNEK and Ina Wroldsen), Anne-Marie's debut album is packed with hits that people can relate to. But she's the kind of artist who's already looking ahead. “I want to continue to make music that I’m really passionate about, and tour the world doing the job I love.”

When you listen to 'Speak Your Mind', you'll realise this shouldn't be a problem.