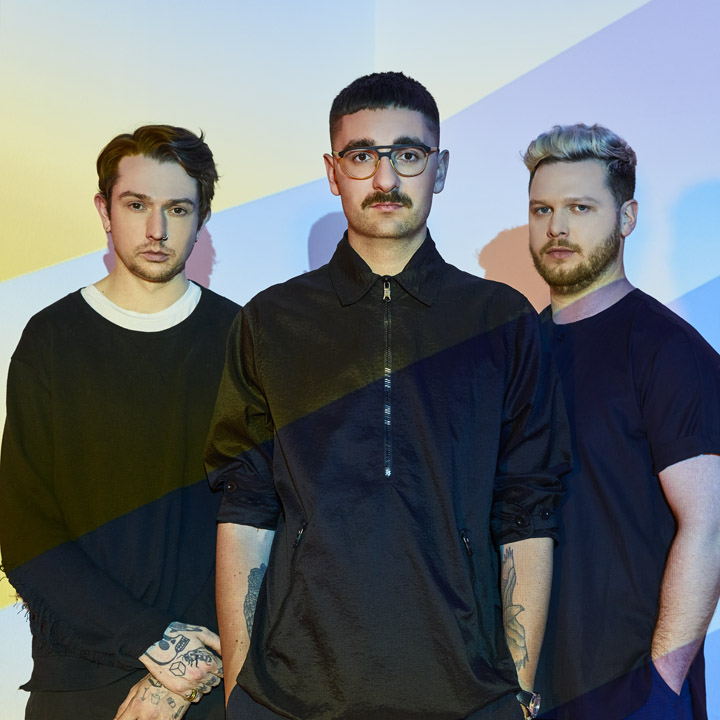 RELAXER is alt-J’s third album, the follow up to the band’s Grammy-nominated This is All Yours. Like the first two albums Charlie Andrews produced it.

In December 2015, alt-J finished touring for This Is All Yours. They had gone straight from touring their debut album, the Mercury Prize-winning An Awesome Wave into writing and recording the second album and then touring non-stop for it (including a sold-out show at Madison Square Garden in NY). “There weren’t any fallings out,” clarifies Newman. “It was just three very close friends who had just spent a lot of time on the road who needed to go somewhere where it wasn’t about music or touring or capitalizing on the demand.”

So they all went home to London. Newman watched a million films. Green released a solo album, High Anxiety (under the name Thom Sonny Green), 21 tracks of glittery, glitchy instrumental electronics. Unger-Hamilton became involved in a pop-up restaurant. Then, late last summer, they decided it was time to record a much-anticipated third album

Unger-Hamilton describes RELAXER this way: “We’ve always liked our music to be headphone music, that takes you on a bit of a journey. This album goes one step further, a journey into your own mind. It’s quite trippy.”

No two songs sound alike, and all are written and recorded with the idiosyncratic details that make alt-J so unique. Take the album’s first track “3WW” which begins with Unger-Hamilton, on vocals, embarking on a Chaucer meets-Nick Drake (pre)amble.  There’s a line in the song “the girls from the pool say hi”– with the last word spoken by the threesome’s girlfriends, delivered from an actual swimming pool.  “‘The girls from the pool say hi’ is a note left from the girls,” says Joe Newman by way of explaining 3WW’s thought-through narrative, “and having them say that –in the pool –is a deeper way of actually making you feel like you’re in the moment.”

First single “In Cold Blood,” which takes it’s title from Truman Capote’s classic book, but has absolutely nothing to do with it in terms of themes, builds to a thrilling, brassy, bleepy, shouty climax.

Later the band takes on a traditional oft-covered folk song “House Of The Rising Sun” which was made famous by the Animals in the 1960’s. The band, with scholarly intent, went back to the core of the song, stripping the varnish from The Animals’ version and finding the woody grain in Woody Guthrie’s version of the lyrics. Then they added 20 classical guitarists, playing all at once, recorded over two intense hours.  “Twenty hand movements, 20 squeaks on strings,” states Newman of their six-string symphony, “that gives a really odd, percussive almost subliminal feel.”

“Hit Me Like That Snare” sounds like The Stooges produced by James Murphy. But originally, admits Newman, the references were very different. “It started with a riff that I was playing around with a year before. But I’d kinda left it because it sounded too much like ‘Decks Dark’ on A Moon Shaped Pool. But then I started playing it with really heavy distortion and we recorded it as a jam.”

“Deadcrush” lyrics reach far, linking a near-death experience on a highway (“we aquaplaned in the car and I shouted out ‘fuck my life in half!’, which I thought was a great phrase for a song”), sex parties in sex hotels (“we didn’t visit any on tour,” is their line and they’re sticking to it) and a post-Brexit frustration that the liberal world was going to hell in a handcart.

The album ends with “Pleader.” The band sees it as a foundational song for RELAXER. It’s one of six songs on the album to feature a 30-piece string section, recorded at Abbey Road.  “Pleader” takes lyrical cues from Richard Llewellyn’s classic 1939 novel How Green Was My Valley, and vocal drama from the massed voices of the boys of Ely Cathedral, recorded in situ with accompaniment from the building’s mighty organ.  “It’s almost a secular piece of religious music,” offers Unger-Hamilton. “For me the song is very hymnal,” adds Newman. “And the book is just beautifully written. You could extract so many visual ideas just from one sentence, so I just collected loads of them and then filtered through an alt-J world.”

The album title, Green adds, was apt...  “RELAXER was originally the name of a track I made last year, and then it was in the original lyrics for Deadcrush. And after that, it just seemed to fit the album overall – and we do always want our albums to be listened to as a single piece of music.”