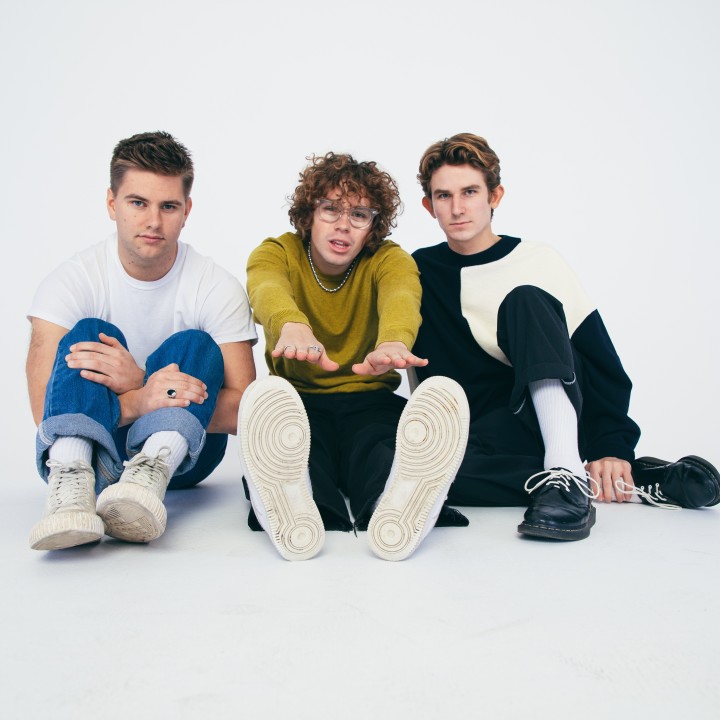 San Diego-based band almost monday got their start playing self-booked shows in their hometown, soon drawing a rabid following on the strength of their larger-than-life energy, effortless charm, and sing-along-ready anthems. Since forming in 2015, best friends Cole Clisby (guitar), Dawson Daugherty (vocals), and Luke Fabry (bass) have gone from performing in the back room of a local surf shop to collaborating with Mark Needham (an engineer/mixer/producer known for his work with The Killers and Imagine Dragons). Signed to Hollywood Records in early 2019, the trio now introduce the world to their brand of alt-pop: irresistibly fun and impossibly feel-good, but full of genuine heart.

With each member now 21 years old, almost monday’s origins lie in the near-lifelong friendship between Dawson and Luke, who grew up playing music together. After crossing paths with Cole while surfing, the three multi-instrumentalists headed into the garage and started dreaming up songs with a distinct surf-rock feel. Once they’d built up a body of work, almost monday tracked down Mark Needham online and emailed him an invitation to an upcoming gig, a shot-in-the-dark move that ended up forging a close musical partnership. Soon enough, Needham connected the band with producer Simon Oscroft, who helped them create their first batch of recordings. During a D.I.Y. show at an airplane hangar less than a year later, almost monday caught the attention of Hollywood Records, and quickly scored their record deal.

Made with Needham and Oscroft, almost monday’s debut material artfully mines such influences as Coldplay, Oasis, The 1975, and Frank Ocean while revealing the many eclectic elements that inspired them to make music: Cole’s passion for punk (sparked in part by attending countless blink-182 and Foo Fighters shows as a kid), Luke’s longtime love of The Beatles, and Dawson’s childhood exposure to seminal alt-rock bands like U2 and The Smiths. almost monday instill each song with the same unstoppable joie de vivre they bring to their onstage performance. “At some point I started dancing really crazy at our shows, and I feel like it helps the whole crowd to put their guard down and let loose,” says Dawson. “That’s what we want for our music in general: to give everybody that feeling of dancing alone in your bedroom, where you’re not self-conscious at all -- you just feel completely free to be yourself.”