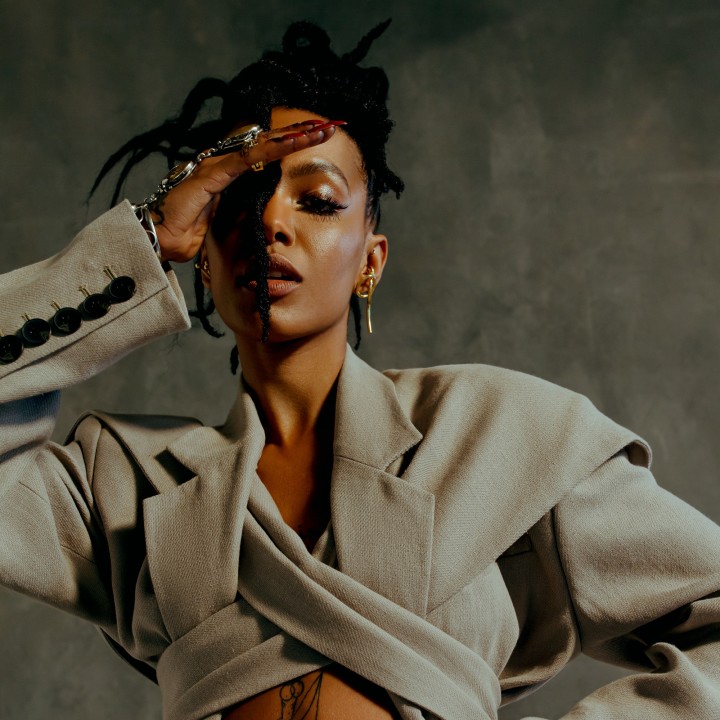 "I want to move people to themself. I want them to feel the same way that I felt when I had a taste of a higher power and felt there was a presence over me. I want people to feel that." - Alewya

25-year-old artist and singer-songwriter Alewya is talking about the story she's trying to tell, about inviting people into intimate moments so that they might find a moment of clarity, and holds her hands up -- the best way to know her, is to hear her.

Born in Saudi Arabia from an Egyptian father who was raised in Sudan and an Ethiopian mother, Alewya describes feeling settled, surrounded by the diasporic immigrant communities of west London after moving from Saudi to temporary housing in London for much of her formative life. It was here, in the house she grew up in that provided an initial musical education.

Alewya's ear for music was harnessed by the exported sounds of Ethiopian and Arabic devotional music from her parents and the vibrations felt through the walls of her brother's bedroom. "When my dad lived with us, I used to wake up to Qur'an playing in the morning" she recalls. "Then my mom's Ethiopian music, lots of Teddy Afro and Mulatu Astatke. My older brother was like an alternative black boy, in those times when it wasn't cool to be. So he used to be playing Smashing Pumpkins, Nirvana, Deerhunter, all ambient alternative rock music." To say that the result was that her musical education was free-flowing is no exaggeration and that movement of going from place to place might explain why the music sounds as much -- the result of picking up emotions and moments and letting them loose.

She describes the Arabic translation of her name being a loose reference to being 'most high' so it's fitting that her music centres around the idea of transcendence. Connecting with a divine creative power, allowing listeners to reflect, and lose themselves is, she says, "exactly the point of the music." While Islam played a part of her early spiritual understanding, it later allowed her the language of accessing a higher power through music.

It was the drum-heavy Ethopian music that connected her sonically to her ancestors that thrilled her ear from an early age. As a result, her current project pays homage to the devotional sounds of the mediative ten-stringed strings of the krar, or the harmonious tones of the one-stringed masenqo. The love of instruments coupled with a force to create moved her to teach herself the blues scale on the guitar at an early age, and she recalls a slightly loose version of Wyclef Jean's '911' as an early attempt. "I'm...not always an expert" she laughs, "but I just try and creatively find myself."

She also found herself in amongst the London-centric musical stylings of the 148 bus that took her to both school from West to South London, and to unexpected sonic places. "I went to a girls school and there was a brother school next door" she says. "Obviously they had a lot of grime MC's there so we used to share music on each other's Bluetooth and infrared so you'd hear all the local MC's."

In a parallel world, Alewya might have pursued her love of maths at University, were it not for the rigidity of the curriculum, that she says, "kind of killed it for me when it got to statistics and all that kind of stuff." "It's like a language and I love to see the madness in it...and the possibilities." Seeing creative possibilities is part of Alewya's world-view and the fact that she's currently doing a welding course in her spare time says a lot about her ability to imagine things that don't exist yet -- her mind she laughs, is full of "things to build."

It was a fortuitous meeting in west London where she was working as a waitress at a local cafe (between shifts at Waitrose) that she was asked to be in a film as a dancer that led her to being model scouted, and later, a period in New York modelling for four years which she calls a 'whirlwind' that left her feeling liberated to make visual art and occasionally post music to a SoundCloud. Being away from home in New York allowed her to unlock what she calls 'creative pockets' in herself and challenge the idea of one kind of rigid identity. "I realised that I wasn't just 'one' thing" she calmly states. "I spent my whole life fighting for who I was and trying so hard to blend in and not be noticed. But it's impossible."

So enticing was the thirst of the music that it was perhaps no surprise that what followed was integration into a scene of artists, and musicians. She found herself in everywhere from the reggae bar, Bar 13, that she'd dance late into the night in on Sundays, to rock and roll bars, dive bars, and hot, humid, pulsing soca-soaked summer carnivals that recalled Notting Hill Carnival back in London, where she hungrily consumed music on dance floors and felt the music move her body in new ways. It was also the Latinx culture that liberated her and when tracks like 'Sweating' are played in a club, it's a call to sweaty, frantically paced dancing bodies of Bar 13 that she might be recalling.

She started making music later in life, and it was the heartbreak following a break-up with a girlfriend that provided the inspiration for her early songs -- staying inside and finding her voice by allowing herself to meditate into long trances. "I just got obsessed with that and started painting first, then progressed to animation which then moved to making beats on GarageBand and the iPad. I was in a cocoon for a while. I left some of it in the slow flow periods of it where it's just sounds like gibberish, sounding nearly like a language. Most of my songs were about that. Just raw feelings." The period saw her writing and painting, and return to London with a fresh outlook on music as art.

When she did return to London, it was at a party at an East London club venue that she met Shy FX, who recognised her artistic charisma immediately. "No one really knows what he looks like '' she laughs, "So I was talking to him I reckon about aliens or some shit. Then Jamal Edwards from SBTV was like "Alewya, do you know who you're talking to? That's Shy FX." They built a rapport, and after he attended her gigs and followed her, he agreed to be her manager.

Alewya's journey of these interlocking musical experiences, draws a nuanced sketch of the music she would go on to make.

Speaking about influences on her process she cites only the dance music culture of west London, reading the works of political revolutionary Eldridge Cleaver, Malcolm X, Haruki Murakami, Audre Lorde, George Orwell and and spiritual healer Queen Afua, and the ten-note ragas of folk Indian sitar-singing mantras from gurus like Sadhguru consumed via YouTube. Talking about songwriting, she says "The way I make music, especially with the guitar, I play two chords, sometimes just one string, and just go in a trance. I can elevate from that." She spent her time painting and the work is always interlinked -- music cannot exist without the visual art and they all inform one another.

On her current project, it's the physical jolts of sensual, melodic dance music on tracks like the upbeat reggaeton trap and dance track, 'Sweating' exist to move you. "Sweating is just pure raw sensual energy ' she laughs, trying to break down the contagious energy of the track, produced by Busy Twist who she was a long-time fan of. "It's about feeling chemistry with someone but also about a female who is not afraid of her prowess and power. It's a mood."

She takes the idea of an energetic spirit further on the bass-rich 'Senorita' written with producer Cadenza. "That one I want to gas up your spirit before you leave the house. Honestly, that's how I feel. I just wanted to align with my spirit, ground my feet and leave the yard. Here she reminds us of channeling transcendental queen energy at every point, reminding you of power and purpose as she declares that she exudes nothing short of royalty.

On Ethiopia, an electric mediation in flutes, hip hop lines and rasping, energetic vocals, produced by Alewya and Shy FX, she pays homage to an ancestral land with a deep dub bass. Speaking about it, she says, "I love it. I want to take that one to Ethiopia. I low key wrote that because I was like, when I go to Ethiopia, I want them to be singing this from their heart." Unleash The Dragon produced by Alewya, gives us a contagious instrumental pulse complete with bass class you move your body to as she urges to be free ("Baby, can you just free me/I might have to unleash this dragon').

That she describes her work as a homage to what she calls "diverse spiritualists" that surround her is no surprise. It's also a moment in time, where sonic vibrations cross borders in the form of London's grit, East african folk instruments, Arabian scales, Grunge riffs, club culture and "realms" to form a universal heartbeat. Alewya's point of view is distinctively hers and all with a central purpose -- to make you feel, and make you dance.

These deep brooding reflections take you through euphoria, heartache, melancholy and back again. Alewya is challenging you to remember the last time you really felt connected. And as she finds the connections between disparate worlds, we're with her in each moment, trying to find it for ourselves too.