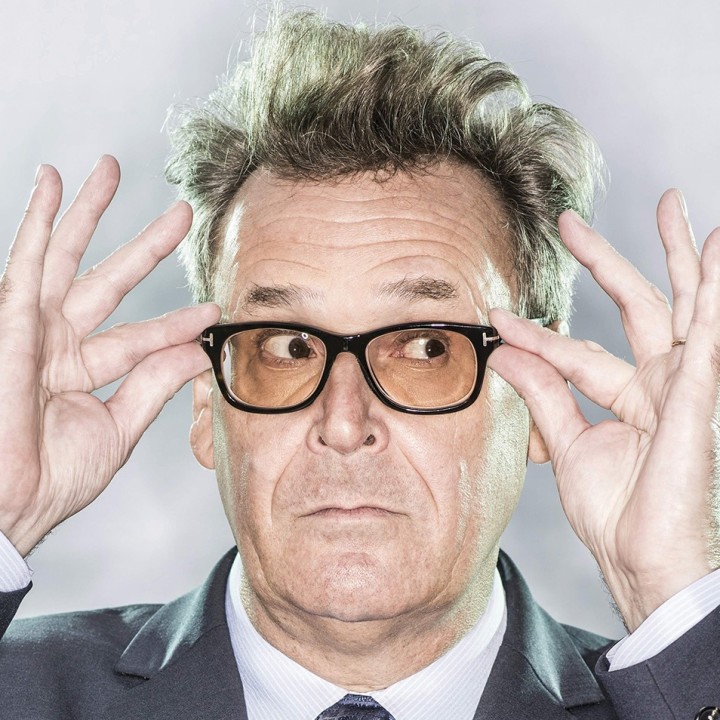 "Here he is, though, in front of a live audience each week, bravely recording some of the boldest comedy on the podcasting frontier right now." -Rolling Stone Magazine

Greg Proops is a stand up comic from San Francisco. He lives in Hollywood. It's not that bad. Really.

The Proopdog is best known for his unpredictable appearances on Whose Line is it Anyway? Both US and UK. Starting it's 7th season on the CW.

Greg is Banzhou the evil cat alonside Zhendaya, Stephen Fry, Reggie Watts and many others in the animated feature Duck, Duck, Goose seen on Netflix.

Stand-up Greg has a new Political Comedy album out called The Resistance. Recorded live in his beloved San Francisco. Available on iTunes and from aspecialthing records.

Monster Greg has had the honor of performing with Danny Elfman at the Hollywood Bowl and the Barclay Center in Brooklyn singing in a live to film version of The Nightmare Before Christmas. This year we perfom live in Tokyo, Glagow, London and Dublin.

Improv Greg is an an Improv group with Ryan Stiles, Joel Murray, Jeff B Davis, Dave Foley, Drew Carey and Charles Esten called Whose Live Anyway? Currently touring nationally. He toured Australia and New Zealand with Colin Mochrie and Brad Sherwood where they taped a TV Gala for JFL at The Sydney Opera House. He also is a frequent guest of the Comedy Store Players in London and improvised with them at Shakespeare's Globe.

Mr. Proops is proud to have hosted for three years the Negro Leagues Museum- Hall of Game Ceremony in Kansas City. This years ceremony with Activist and daughter of Jackie and Rachel Robinson, Sharon Robinson and All-Stars, Dave Parker, Eric Davis, Fred McGriff and Dave Stewart can be heard currently as a live podcast.

"Funny, political, literate, and bold -- all at once." -New York Journal of Books

Mr. Proops book The Smartest Book in the World is based on his award- seeking podcast. Now out in paperback. He threw a podcast and signing at Shakespeare and Co. in Paris. smartestbookintheworld.com

The Greg Proops Film Club is a popular podcast digging vintage movies is available on iTunes. He has recorded at the TCM Film Festival, Edinburgh and the Egyptian Theater in Hollywood. Film Buff Greg hosted Ouch:The Slapstick Movie Festival movies on TCM.

Greg has lent his voice to Hell and Back, Star Wars the Phantom Menace, The Nightmare Before Christmas and he really was Bob the Builder.